There is need for all of us to remain creative in order to meet life’s demands and improve the communities in which we live and serve. Like Professor William Bazeyo, Dean Makerere University School of Public Health and RAN Chief of Party/Lab Director has always put it that ‘Be a Contribution’, the RAN team has continued to support innovative minds to realize their dreams through the Pitch Tuesday Sessions. During this session, an innovator, a student, faculty and or community member registers to share his or her idea with the RAN team. It is also an opportunity for the innovators to offer clarity about the proposed solution and receive constructive feedback towards further development of the solution.  Are you and your team working on an innovative solution? A different way of doing things, register to share it and receive real time beneficial feedback from a team of experts and mentors at the RAN Innovation Lab.

Some of the Innovative solutions recently pitched to the RAN team include the following;

This is a program that engages youth in Agriculture and environmental protection shared ideas about their new App with the RAN team.  This team was spear headed by Jonan Kato, a Social Entrepreneur and an Innovator of CIP Agrik APP. The App focuses on creating market for rural youth farmers through connecting them directly to the buyers, sharing contacts of Agro-input dealers, access to trucks and stores for hire among others. Kato also demonstrated how the App is used, their expectations from the audience, their achievements thus far and the challenges they are already experiencing while highlighting a few of the possible solutions to these challenges.

These engagements are usually interactive as the team was advised to;

Innovator Kato also added that, there are so many challenges coming their way but the most serious threat they are currently facing is lack of finances and political interferences as several Political Leaders usually interfere with their meetings and ask for money which they are not yet generating.

Additionally, Kato also shared that the Career Imagination Program is currently based in two districts in Uganda; Luwero and Mubende and the team of innovators has created CIP clubs in different schools within these districts. The team is also working with Bukalasa Agricultural Institute to equip the youth with modern farming methods and skills while mentoring them to become better Agriculturalists. The team is also organising a green carpet event (dates to be confirmed and communicated to all) scheduled to take place at Silver Springs Hotel in Bugolobi, Kampala Uganda. This event is aimed at expanding the innovation audience and will bring together successful farmers who have used the app, influential people like artists, comedians, public speakers and students from different schools to engage for the betterment of the innovation.

Just like a phone with an installed xender app can detect another device within its range, this innovation is also based on the same idea. If such an innovation can be installed in automobiles to help drivers detect automobiles within the set range showing their direction too, this can be of great help since it equips the driver with information about his surroundings in terms of the available automobiles.

This innovation is designed to help reduce fatal accidents that occur due to lack of information by the driver for example; in a case where one is planning to drive through a sharp corner or trying to overtake flowing traffic, this innovation is meant to help the driver be sure of what lies in front and behind him while he is on road. It is advanced in a way that, even if obstacles are present, the innovation can detect what lies in the driver’s safe perimeter i.e. the automobile within the range.

HealthLink is a mobile and cloud based platform that aims to make healthcare more accessible and efficient in Uganda by providing an innovative and secured medium for patients to access care from health workers.

Health workers to population ratio in Uganda is 1:1298 compared to the World Health Organization (WHO) guidelines of 1:439. This creates a dire situation in which health practitioners have to serve large numbers of patients despite their meager remunerations. Patients also struggle to find the right practitioners at the right time. Since 2003, the number of government health units has increased from 2301 to 26,803. This has however not been matched with the required increase in the number of health workers with challenges related to recruitment and retention of qualified staff, a very low doctor to patient ratio of 1: 24,725, and a nurse to patient ratio of 1: 11,000 mainly due to low remuneration as well as insufficient career opportunities. Patients usually depend on verbal referrals to locate skilled and trustworthy doctors for their delicate needs. This often leads to poor recommendations, missed appointments, or unsatisfying consultations with no follow up. This is not limited to Uganda but an African challenge that needs a solution.

This team of innovators were pitching this innovative idea to the RAN team for the 3rd time now. It is exciting that they are now already hitting the market since the innovation has been piloted in Kisenyi Kampala City Council Health Centre 1V, Vine Medical Centre and Mengo Hospital Home Care Unit. They also shared that they have a revenue of Ugx. 300,000 so far.

This team joined those innovators who pitched their innovative ideas during the Pitch Tuesday sessions to present the progress of their project.

This is an innovation benefiting under incubation in the RAN Youth Spark Innovation Grant (YSiG) cohort. They are working on improving livelihoods of communities around Lake Albert in Nebbi district by empowering them to contribute to the value chain of tile production from snail shells. They presented the tile prototypes that had been lab tested for strength and water retention.

To crown these Pitch Tuesday sessions was a presentation by Andrew Gilbert Were, BUP (MAK), MUEP (NTNU) joined in to share about his PHD study on STREET VENDING: How it is Organized and Managed in Central Division of Kampala City.

There are conflicts between street vendors, KCCA and other street space users over the use of street spaces. The conflicts threaten and destabilize livelihoods of street vendors. The cause of conflicts is unknown. Meanwhile, while the alignment of the city streets has held throughout the city’s development, the form and function of the street has greatly evolved. Kampala city streets were planned for the unhindered movement of both pedestrian and motor traffic. However, due to unemployment, limited space in open air markets, limited capital and unaffordable rent in downtown shopping malls, there is pressure from street vendors to appropriate street spaces. The research seeks to investigate the nature of street vending, the actors involved, the resultant conflicts and how the conflicts can be minimized.

The Aim of this research is to investigate the nature of street vending and how it is managed in Central Division of Kampala city, with a goal to improve resilience and safeguard livelihoods of street vendors amidst a harsh working environment in the urban economy.

Were also received feedback on how best to effectively engage with the relevant stakeholders in order to harness more from the proposed work with reference to the actual street vendors in Kampala City. ‘It is such projects which can quickly lead to the transformation of Kampala City and thus need our support’ noted Dr. Roy William Mayega, RAN Deputy Chief of Party.

Benefit from a pitch Tuesday session at the RAN Innovation Lab, register at http://www.ranlab.org/pitch-tuesday. 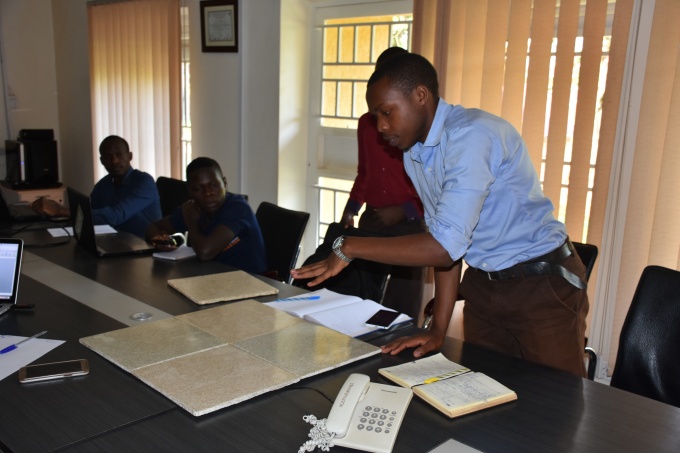 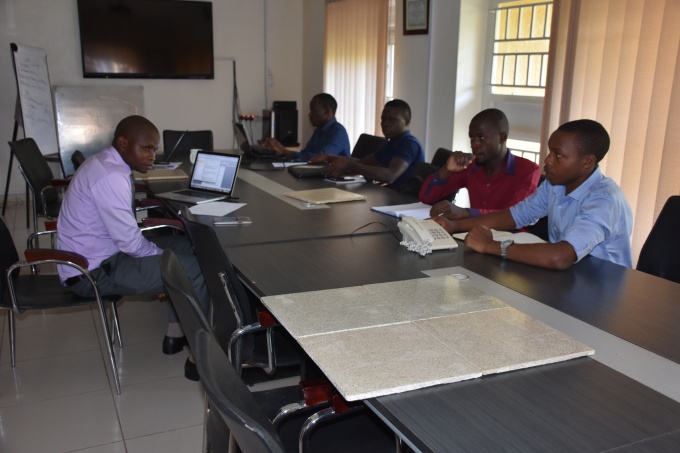 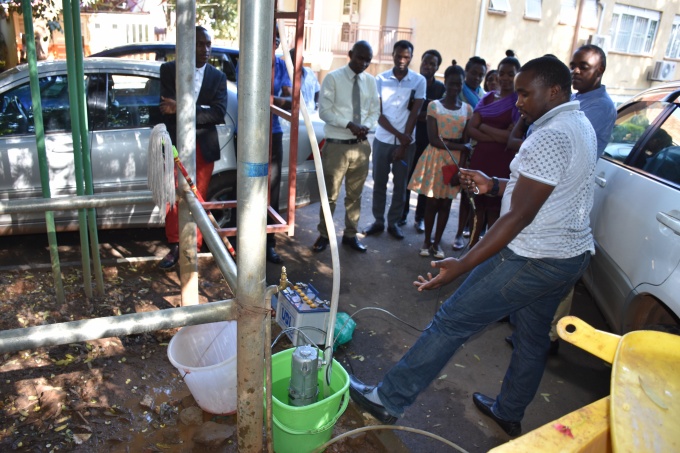 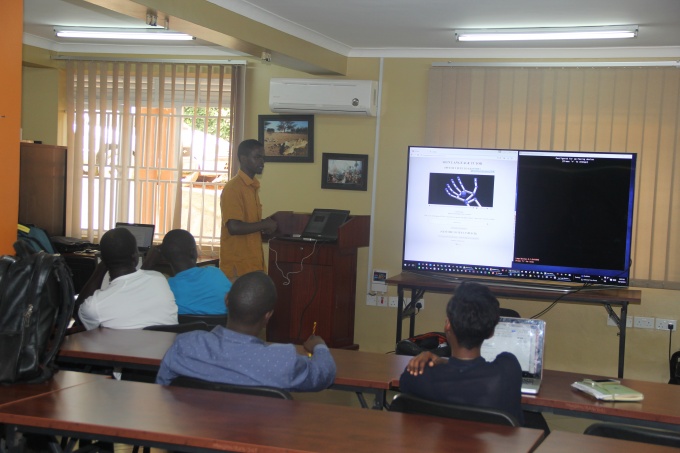