The Social Mediatraining session was conducted using an interactive kind of approach to practically demonstrate the vast functionalities of the different social media platforms. The intention of this was for the attendees to showcase their skills in the different social media platforms to their fellow counterparts. Stepping out of the crowd as volunteers for the Twitter and Facebook run-throughs were Byomuhangi Owen and Okello Emmanuel respectively and Lorna Maria leading the blogging session. 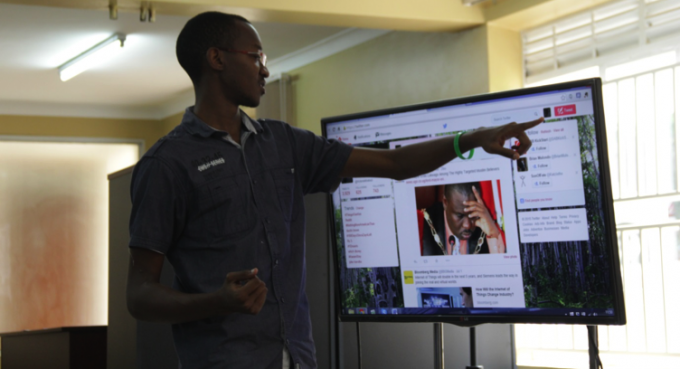 Before Owen took to the stage, most of the student interns admitted that they were not frequent Twitter users citing reasons like: they do not see the need of having accounts on both Facebook and Twitter, some were dim witted by the fact that there were only 140 characters for every post whilst the rest found the platform very formal and corporate which was not what they were looking for currently.

Listening to them speak about their honest grievances reminded the facilitator, Victoria Mbabazi of the first time she interacted with Twitter; it was also a bitter sweet moment learning and adopting to a new platform other than the customary Facebook.

Owen demonstrated the different features of Twitter which include;

He also emphasized the importance of selecting one’s following carefully because these are the same people whose posts one will be viewing on a daily basis.

In conclusion, Victoria explained to the interns the importance of having a relevant username and handle as well as having a completed profile. For the username and handle she stressed that this is personal brand identity that needs to be easily comprehendible to a person searching for you online. She also highlighted the significance of a completed profile saying, “The profile you choose to put up is your elevator pitch to getting the right online followers and have a reputable online presence.”

For this very interesting dot com group of interns, Facebook is their God of social media. For some, when social media is mentioned Facebook is immediately at the tip of their tongues. This platform did not need a lot of emphasis; however, Emmanuel still came forth and illustrated the practicality of Facebook. Some of the highlights of his session were;

Thanking Emmanuel for the very elaborative session, Victoria shed more light on how to connect a Facebook account to a Twitter account to eliminate repeated posting on both the platforms separately. She also spoke about how to ably manage and promote Facebook pages. With examples of pages that she manages, she showed the interns how a page can be efficiently managed by more than two people at the same time, the possibility of scheduling posts prior to the time of publish and also how to boost the visibility of the page through Facebook promotion. Furthermore, she also encouraged the interns to look beyond the casual use of Facebook and consider the career prospects like social media marketers, content creators to mention a few.

Victoria Mbabazi demonstrating how to use Tweetdeck

One of the challenges the interns shared in the introductory session was that having multiple social media accounts that one is managing can be hectic and very time consuming many a time. Owing to this sentiment shared, Victoria introduced them to a platform called Tweetdeck that supports in online social media management of Twitter accounts. This was undoubtedly a new exciting concept to all of the interns and they were very enthusiastic to learn how the platform works. The ideas shared are were;

In this day and age, time is of the essence and it is inevitably paramount that planning for our different engagements be done keenly and with precision in order to prevent any personal or professional disappointments. The incorporation of Tweetdeck and Facebook pages were the highest ranking platforms that can bring the former mentioned statement to life.

Contrary to the first two social networking platforms, LinkedIn is a professional online environment that is used to build constructive networks regarding career growth. The Interns were introduced to LinkedIn and how they can utilize it for professional benefit in marketing their skills and abilities to the online world.

An illustration was made to show how a well detailed profile can be created, how skills can be added, how to connect with other people, how to add jobs and projects that you have participated in and how to use one’s LinkedIn profile in emails and also as a landing page for Facebook and Twitter. 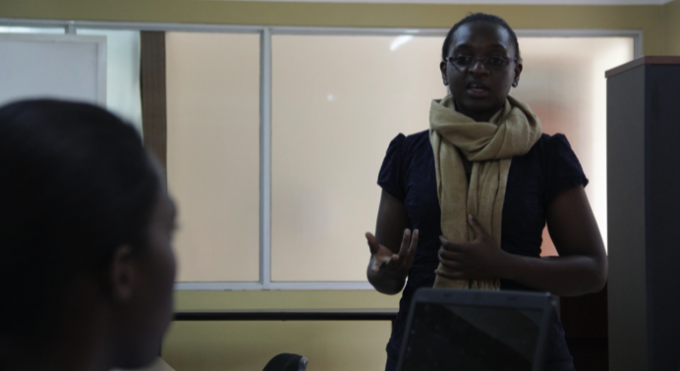 Documentation is one of the key arrays to measure success in and out of school as it shows what and how a goal set was achieved. The focus was put on WordPress blogging platform although there are various other platforms like Google blogger, Tumblr etc.

The WordPress demonstration was championed by Lorna Maria who has vast experience in blog development and maintenance. Techarbour is one of the blogs she helped develop and maintains (Techarbour.net).

She highlighted that WordPress is a good and recommended platform to share information and generate content for social media marketers. 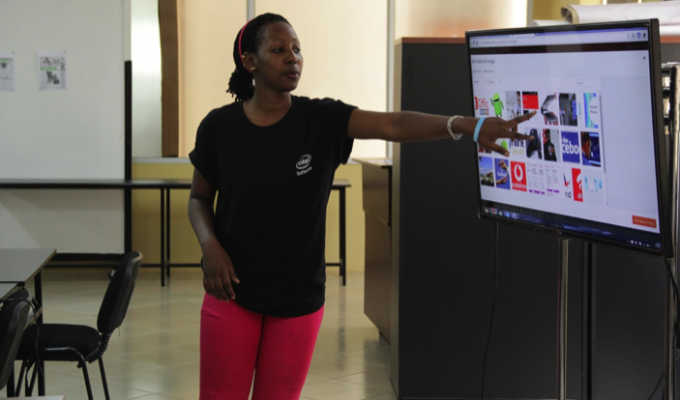 The dynamics of blogging in the words of Lorna Maria

Lorna gave a walk-through of how to use WordPress from the nitty-gritties of selecting a theme, how to write a blog with appealing posts, setting thumbnail images for each post, putting social media sharing buttons and crowning it off with how to allow and deny some of the comments made on posts.

With most of the ground covered, it was thirty minutes to 1pm and time for the final remarks which were twofold, the interns each shared what lessons they had learnt throughout the session (highlighted in this report) and the closing remarks from the trainer.

Victoria encouraged the interns to look outside the box of social media and harness the opportunities it presents. She tasked them to research about how to better their career aspirations and make money from social media, whether through digital marketing (Google AdSense, Google Adwords or Facebook and Twitter Ads) or simply by maintaining a good personal online presence. Ultimately, social media can only be influential if used correctly and wisely.

About the Social Media Instructor: Victoria Mbabazi is a software engineer with vast experience in the use of social media platforms for both business and startups. She is a former Google Student ambassador for Makerere University 2014-2015, a 2015 Tony Elumelu Entrepreneurship Program finalist and alumni, and entrepreneur. Victoria’s