A community radio technology with the potential to revolutionalize last-mile communication in hard-to-reach and war ravaged areas, using a mobile phone for broad-casting (103.8FM)

The station, the first of four stations ( in Pabbo – Amuru District, Patongo-Agago District and Kitgum Town ) to be launched in Northern Uganda, uses a smart phone to replace a studio, and affordable solar power to replace expensive national grid electricity or a generator that all total up to Ugx. 8 million only. It broadcasts for 20 to 30 kms radius, a much smaller range than commercial stations, but this allows it to provide hyperlocal content, advertising by village based traders, and host local community dialogues and discussions. The stations are designed to best serve rural citizens and bridge the gap between the communities and the currently available commercial Radio Stations which are located within the business centers of operation hindering access. This station was developed by a team of technology innovators from RootIO, supported by Makerere University School of Public Health ResilientAfrica Network (RAN) as well as the Knight Foundation, which supports engaged and informed communities. “RootIO puts together radio, the Internet and telephony to come up with a hybrid solution with greater benefit than any of the individual technologies on their own,” says RootIO CTO Jude Mukundane. “By focusing on intra-community communication, we hope to help communities find their own solutions and innovations, and build their own resilience.”

Among others, one of RAN’s thematic areas of focus is strengthening resilience of communities to shocks and stresses arising out of chronic conflict and their effect on livelihoods. Conflict in Eastern Africa takes on different manifestations such as the slow pace of recovery after the guerrilla conflict in Northern Uganda, the persistent cases of Gender Based Violence in DRC and an increasing influx of Congolese refugees into Rwanda. Given these and many such scenarios, it is hoped that the community will use the community radio coined “Radio Station in a Bucket” as a platform to build resilience of the communities by raising awareness to the resilience challenge of the effects of chronic conflict among the war ravaged communities in northern Uganda especially in the districts of Pader, Lamwo and Lira where RAN is currently operational in the region. “Let us all join in translating the rich existing knowledge into innovative solutions to address African communities’ most pressing challenges. Makerere University School of Public Health is committed to continuously supporting community transformation.” Prof. William Bazeyo, Dean Makerere University School of Public Health and RAN Chief of Party/ Lab Director.

Mr. Francis Angor Local Council III Chairman, Aber sub-County in his remarks urged the community to jealously guard such community developments. He also thanked the United States Agency for International Development (USAID) and Makerere University School of Public Health for generously supporting community initiatives directed towards transforming livelihoods. He noted that the first Radio Program that would be run on the Community Radio Station would be on Sanitation and Hygiene but added that several other programs including marketing of farmers produce and early warning alerts in case of an anticipated disaster were lined up for broadcast through the Community Radio. “We are proud that Makerere University chose to start such a great initiative nowhere else but here in Aber sub-County, we pledge commitment to working with the RootIO Team to further this initiative” he added. Being part of the team in Aber sub-County, it was indeed a great feel amidst the excited community members. The Community Leaders present at the event freely shared their joy about the initiative and continuously re-echoed their support to ensure that the Community Radio is used for the purpose it was set and positively benefits Aber sub-County and beyond. 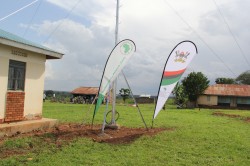 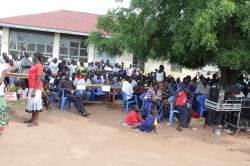 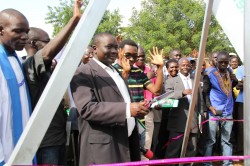 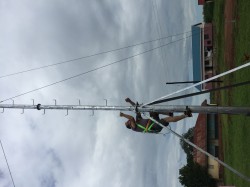 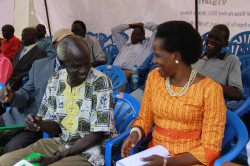 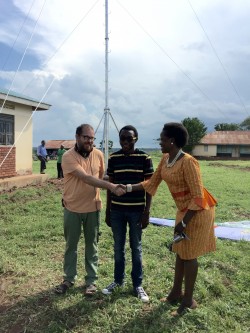 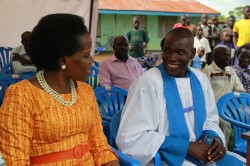 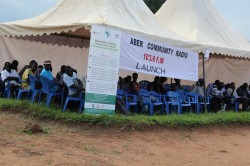 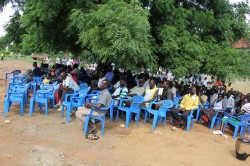