As a fast growing institution, the afternoon of Friday September 22nd 2017 saw a team from Makerere University College of Health Sciences School of Public Health (MakSPH) host 2 Irish Parliamentarians Hon. James Lawless, (Teachta Dála) or MP of Lower House of Parliament andSpokesperson on Science, Technology and Innovation https://www.fiannafail.ie/people/cllr-james-lawless/ http://jameslawless.ie/ and Hon. Neale Richmond,Fine Gael party Spokesperson on European Affairs in the Seanad Éireann (government upper house of the legislature). http://www.nealerichmond.ie/, Mr. Frank Kirwan the Head of Cooperation at the Irish Embassy and Mr. Simon Murtagh, an Administrator in the Irish Parliament. This visit was coordinated by the IRISH AID funded NOURISH Project (Nutrition and treatment outcomes: development of a Ugandan-Irish HIV/Nutrition Research Cluster is an IRISH AID funded project aimed at increasing the understanding of the complex interactions between food security (when all people at all times have access to sufficient, safe, nutritious food to maintain a healthy life), HIV/AIDS and socio-economic factors, to impact intervention programmes at national level and benefit the poor in Uganda.   From MakSPH, the meeting was attended by the Ag. Principal of the College of Health Sciences Dr. Rose Chalo, Prof. David Serwadda who chaired the session, Associate Prof. Fred Wabwire-Mangen, Associate Prof. Nazarius Mbona Tumwesigye, Dr. Susan Kiwanuka (Senior Lecturer), Dr. Henry Wamai (Senior Lecturer), Dr. Andrew Kambugu of IDI (another Co-PI), several other staff of the School of Public Health including some of the PhD students benefiting from the project and the media.

The NOURISH Project is a collaborative effort between Trinity College Dublin in Ireland and Ugandan Institutions-Makerere University, Infectious Disease Institute (IDI), Gulu University in Northern Uganda and Joint Clinical Research Center (JCRC). It started in 2012 and was building on the network created by a previous project called INDIGO and funded by Irish AID. The INDIGO project was a training program which supported 2 PhDs for Makerere University in Kampala Uganda. The NOURISH Project’s country coordinating office is located in the department of Epidemiology and Biostatistics (EPI-BIO) at the School of Public Health. It is important to note that, the NOURISH project with both PhD training and research component, is coming to an end, thus investigators also used this opportunity to share project achievements but also deliberate on the way forward with all the engagement attendees. The project focuses on issues of food supplementation, food security in Karamoja and nutrition and health status of people living with HIV.

As he welcomed participants to the brief engagement with the Irish AID team, Prof. Tumwesigye, shared that, on June 5th 2017, Prof. Martina Hennessy, the NOURISH Project’s Principal Investigatorfrom Trinity College Dublin, himself one of the Co-Principal Investigators (PIs) and Mr. Simon Murtagh, the Project Administrator visited the Ireland Parliament with the intension of briefing the Members of Parliament (MPs) about the NOURISH project highlighting what it has done and what its able to do.  He shared that they met  with Members of the Association of European Parliamentarians for Africa (AWEPA) including; Maureen O’Sullivan TD (Head of Irish AWEPA Section and Vice-Chair of the Oireachtas joint committee on foreign affairs), Seán Crowe TD (Sinn Féin spokesperson on foreign affairs and member of the Oireachtas joint committee on foreign affairs), Ursula Ni Choill (assistant to Senator Ivana Bacik), Janet Horner (assistant to Senator Alice Mary Higgins), Ed Davitt (assistant to Senator)  Grace O’Sullivan, (Green Party spokesperson on foreign affairs) and Simon Murtagh Program Manager, AWEPA Irish section.  The meeting went well and the MPs expressed the need to further support NOURISH Project’s and MakSPH’s efforts and promised to physically visit if an opportunity arose. ‘As a follow-up of the June meeting, Mr. Simon Murtagh wrote to me on August 29th 2017, informing me that some of the AWEPA MPs would be coming to Uganda and that they would be able to visit MakSPH. Thank you for keeping and delivering to your promise’. Said Prof. Tumwesigye.

Noting and sharing about Makerere University’s growth thus far including being the fourth best University in Africa, as he concluded his remarks, Prof. Tumwesigye shared that Makerere University is an able institution to nurture and push forward Ireland Government’s efforts and engagements in Africa.‘It takes a lot of effort to create such a network like the NOURISH Project’s network and therefore, we need to continue with discussions directed towards further leveraging collaboration so that we can continue serving the communities in need’, he added.  Prof. Tumwesigye also thanked the Irish Embassy noting that the team from the Embassy has been very supportive. He also thanked the management of Makerere University School of Public Health which has always provided an enabling environment, partners and all colleagues who have worked closely in different capacities to achieve a common Goal.

In her remarks, Dr. Chalo noted that the NOURISH project has brought together new knowledge which is beneficial to the African and in particular Ugandan communities especially nutrition among people living with HIV. ‘Uganda has a high burden of HIV yet nutrition issues for this vulnerable group has not been given so much attention. This vulnerability does not stop at the need to restore health alone but affects the economic status of the infected person and the general household’ she said. The information on seasonality influencing food security in Karamoja region is also very helpful since these communities will then be able to know what to grow and ensure that they store some food for times when they do not have any harvest’ Dr. Chalo added. She also re-echoed that, given that Makerere University’s core mandate is research, teaching and community service, the institutional staff were glad that the Irish government had funded a project that offered PHD opportunities to Ugandans. By doing this, the project has contributed to its sustainability since the qualified persons would later offer the teaching service to upcoming University students and the circle continues. ‘Makerere University is open to all kinds of collaborationand we have the expertise and all you need from a collaborator, she added.  She wished the team of visitors and all safe travel back to their countries and stations of work.

The Irish Parliamentarians appreciated the work Makerere University as a whole is doing noting that they always read about this institution’s efforts and would like to take this opportunity to thank all individuals there in for the good work in progress. They also advised the research team to push for translation of the knowledge generated and shared thus far into policy for wider sharing and impact. They also noted that they were open to further collaboration but would not commit to anything at the time. ‘Let us all keep in touch and exploring possible areas for further partnership and collaboration as we strive to positively impact those communities where we live and which we serve’ said Frank Kirwan, Head of Cooperation at the Embassy of Ireland.

The NOURISH Project has achieved so much: Created a nutrition oriented cluster of researchers with multi institutional and multi-disciplinary researchers, established new information and trained 4 PhD and MSc students.   Read more about the NOURISH Project here.  The conversation was also shared on Twitter @AfricaResilient tagging @maksph @MakerereU @@Irish_Aid and other partners. 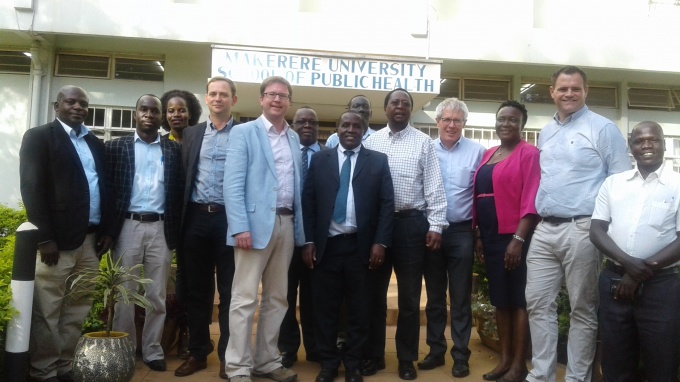 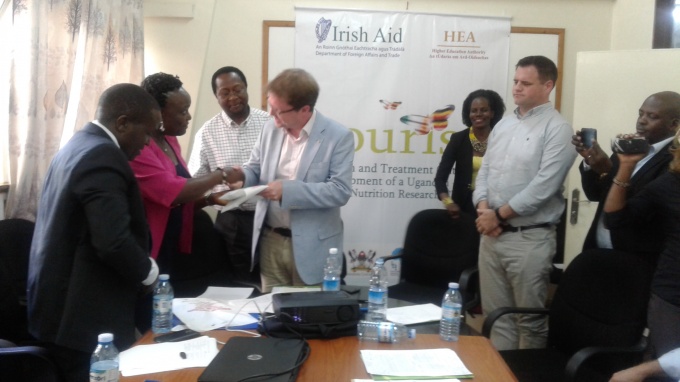 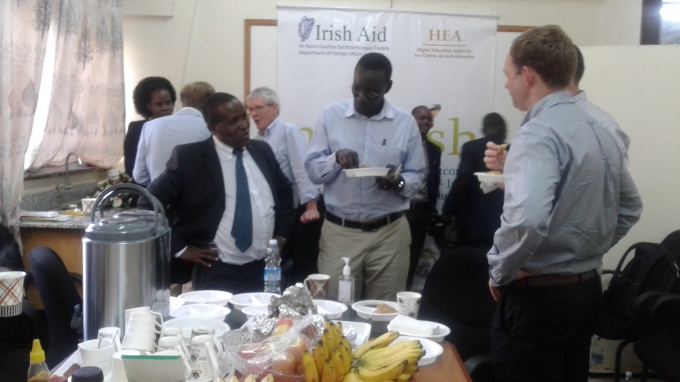