The National Technovation Challenge Capacity Building and Award Ceremony event is taking place this Thursday (20th July, 2017) and Friday (21st July, 2017), respectively.
The first day of the National Technovation Challenge, will work to further expose all the girls to various applications of Science, Technology and innovation through brief sessions led by RAN, STEMPOWER and InnovateHer, to mention but a few. We will also give some of the girls an opportunity to pitch their ideas and receive feedback in the ‘Open Mic” session. Due to the numerous applications received this year, the team (supported by the judges) selected the Top teams from the two best schools in each region (North, Central and West) to present their ideas on day 2 (21st July). The winners from this finalist round will be selected and awarded for their efforts.
The 2017 Technovation Challenge Activities
The two-day event is the culmination of a 12-week technology and entrepreneurship curriculum and competition that teaches girls to identify and address pertinent problems in their community through the development of a mobile phone application. Together this year, we have hosted regional pitching events for the Global Technovation Challenge in Northern and Central Uganda, we have reached out to some new schools in four regions of the country (Eastern, Northern, Central and Western Uganda) and received close to 40 applications addressing the United Nations (UN) Sustainable Development Goals (SDGs), the theme for this year’s National (and Global) Technovation Challenge. These successes are a direct reflection of your combined efforts.
We look forward to your support and involvement as the days unfold. 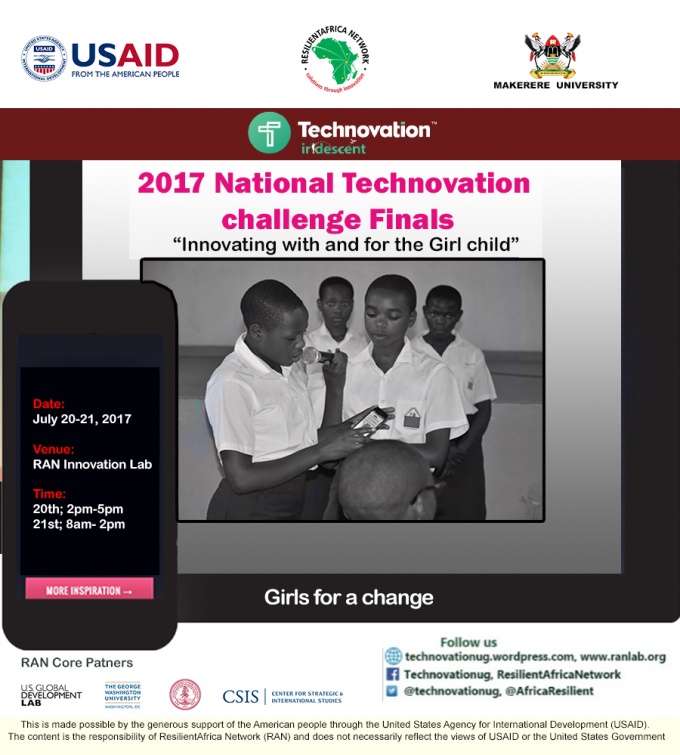