Home / AMPION Venture Bus 2015 at RAN; Experiences from a Traveler!

AMPION Venture Bus 2015 at RAN; Experiences from a Traveler! 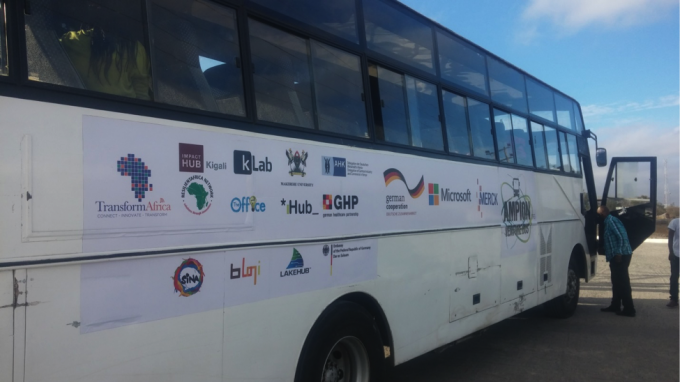 The mighty Kenyan bus that ferried us across East Africa

When I got a notification from my good friend and colleague from the GIZ office in Bonn asking if I was aware that the Ampion Venture Bus was soon coming to East Africa and If I wanted to join this year’s tour, I paused a little bit…recollected and remembered that a year had gone by since the Venture Bus failed to make it to Kampala on its way to Kigali. “Not again, I told myself and Yes”…I quickly responded. My Ampion journey as well as lessons begun immediately after the call ended.

The Ampion Venture Bus the leading Pan-African entrepreneurship initiative enabling young Africans to begin ICT companies, creating considerable social and economic impact. This year, the 7 day East African Tour started out in Dar es Salaam, to Arusha in Tanzania, Nairobi to Kisumu in Kenya, Kampala to Mpigi in Uganda and ultimately Kigali in Rwanda. The 60 participants (50 entrepreneurs, 10 mentors) on board had a ride of their life with stopovers at selected innovation hubs within the region namely; Buni Hub (Dar es Salaam), iHub (Nairobi), Lake Hub (Kisumu), ResilientAfrica Network- RAN (Kampala), Social Innovation Academy – SINA (Mpigi), K-lab (Kigali) and with a grand dinner at the Transform Africa Summit 2015 (Kigali). The focus for this years’ tour was creating e-Health solutions for a smarter society. The tour was made possible with support from sponsors that included Merck, Microsoft and the GIZ.
After spending over 70 hours on the road, and with a new geographical stop over each day, beyond the intense brainstorming & mentoring sessions, travel fatigue and changing weather patterns, I learnt lessons along the way and below are some that I jotted down as they almost happened.
#1 Preparation is everything

In the weeks that followed, emails steadily rained into my inbox with preparatory information about the entire trip and what was expected of me as a mentor. The email about the curriculum made my hair standup for a bit. I had to make a presentation about the Business Model Canvas and Lean Principles. What followed were series of intense reading, research and preparation of notes especially about the lean principles. As luck may have it, I got an opportunity to facilitate two workshops on business modeling for digital innovations. Not only did I practice for my bus presentation, I also got mentored at one of the workshops by senior personnel on the same topic. Indeed, the bus presentations were explicit!
#2 Balance your weight(s)
Just on our way out of Dar, we were held by the weigh bridge traffic police officials because our bus was overloaded. Being innovators, we did a quick needs finding analysis, identified the problem, brainstormed various solutions and hit the prototyping phase, thanks to Lillian’s Design thinking session at Buni Hub. This was the equation; 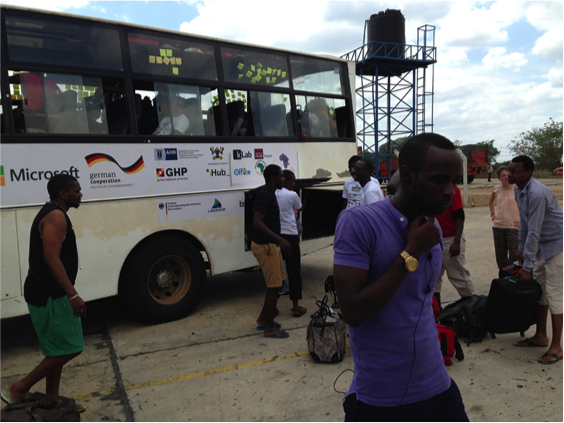 Guess what, we failed! Why? As with most startups, we should have invested more time in understanding the problem and thus generating more feasible alternative solutions thus saving time as a resource. Secondly, we (probably) didn’t do a good job on ideation stage, (we quickly jumped to prototyping and testing), but this time, options like passenger weight redistribution emerged; the heavier passengers to the front, and the lighter ones to the back. Indirectly, this intense exercise also got the participants to work in teams. We had more participation in redistributing luggage in the bus cabin below than earlier before. The results were amazing! We were cleared, but still paid hundreds of thousands of T-shillings as a fine for not balancing our weight(s) earlier.

#3 Always be prepared for the market place
After a long, hot, and hectic journey punctuated by lots of highway police stopovers, we got to our final resting destination; The Lutheran Uhuru Hotel at 11:43pm on Wednesday. There we had our 1st great dinner and dived into working again. Goal of the night, sell your idea in the problem market to get the highest votes and hence a team. For the next couple of minutes I observed that most of the participants needed training on sales, negotiation and partly marketing skills. 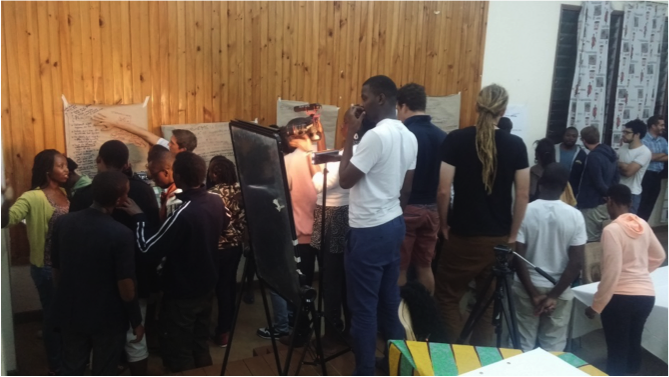 The photo above shows the participants in the market place hustling and haggling their ideas.

As naturally expected, complaints about unfairness arose after teams (based on the number of votes gained) were chosen; but it was simple, those participants were just not great sales men or the ‘customers’ didn’t see any value being proposed! Unfortunately in the startup world, sales and negotiation skills are a bedrock requirement.

#4 Feedback is priceless, get it, and utilize it.
“I feel listened to! The meeting in the morning was good and rejuvenating and I actually didn’t think that the Ampion leader was keeping tabs on everything/everyone on the bus.” One of the participants on the bus told me as we got into the bus on our way to Kisumu, the previous day most participants had contracted a minor but messy stomach illness. The root cause of her concern, just like the rest was a poorly defined and inconsistent communication channel between participants and the organizing team and this could have been caused by an assumption that everyone was an adult and understood their purpose on the bus among others. Unfortunately the short outbreak of a minor food poisoning taught almost the entire bus occupants the lessons of communication, empathy and lastly to the organizing committee, the value of feedback.
#5 Mentorship isn’t for the faint hearted
It was after the pitching at the iHub in Nairobi, that we realized how far we were from what a standard pitch, later on startup should be. Anguish, exhaustion, for some worry were written on our faces as mentors.
Etienne (white guy), Lillian (lady below on my right) and myself mentor one of the teams on the bus 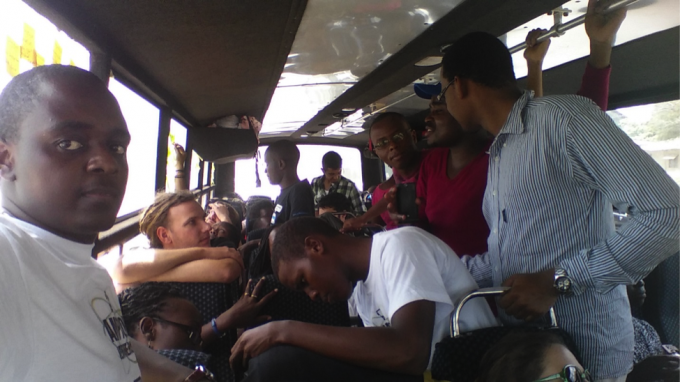 “This can’t be happening, I told myself.” I felt I had already put in so much yet just a little of my expectations were met. Fast forward, our plan of action the next day? Take the teams through quick but short sprints of brainstorming, preparing presentations and then pitching; for almost every 2hrs on the bus, this happened routinely and by the time the teams pitched at RAN Lab Kampala, results were amazing! Bravo to all the bus mentors!

#6 A good leader is like a compass on a ship.
When a team a team has great leadership, it only has to “prepare for glory” (Courtesy: 300 the movie). On face value, the Ampion Venture bus appeared to be a beautiful luxurious journey where entrepreneurs are taken on a ride connecting with their fellows from other countries. Unfortunately was a complex web of strings that included managing cultural shocks, activity schedules, cross country laws, boarder point checks, meeting sponsor’s expectations etc. I appreciate how hands-on Fabian-Carlos Guhl was during the entire trip. He seamlessly checked on the progress of all activities on the bus and furtively moved out ahead of Nairobi’s harshest traffic or midnight flights at Entebbe to ensure our next landing was generally smooth, amidst all that, he kept wearing his smile 😉 His stewardship not only kept us focused on to the mission but positively bound us together.

#7 Get a bus boyfriend / girlfriend
Yes! As contentious as it is, it was another lesson for me. The bus presented an opportunity to learn about a new culture, new greeting, understand traditions from other communities, taste new food, and last but not least, get a better explanation about the vast innovation ecosystem from a new community/city/country as told by your fellow participant whom I chose to call a boyfriend/ girlfriend. Secondly, for every city we had a stopover, chances were high that your neighbor had been there, hence a free tour guide right next to you. What an interesting journey it was!
#8 Always anticipate serendipity (friends, adventure, winning, great food, culture …etc.)
As our journey came to a much known but less desired end, the last morning at breakfast in Kigali city, I learnt my last lesson. 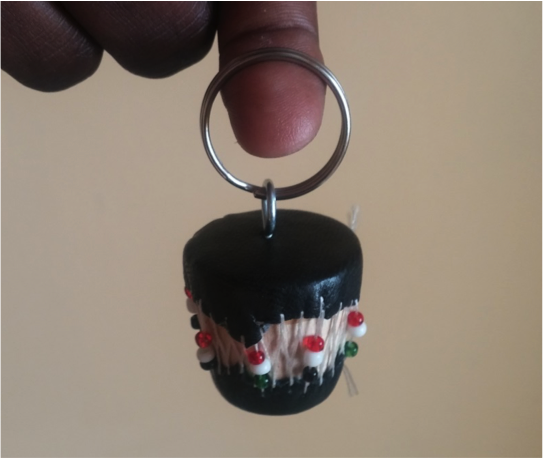 “…Brian, this is for you. I was inspired by all you did!” “…I bought these little gifts for the great people I hoped to meet on the bus”, she said. This lady had not only hoped to be inspired but also prepared to return the favor. I could have known how to hope for the best, but to prepare to return the favor before you get it, that was my lesson!

Credits: The Social Innovation Academy (SINA) is a place worth any creative person’s visit. I was impressed and challenged by the level of social cohesion as a society of individuals with diverse backgrounds, yet with a common goal of creating jobs for society and environmental impact. Their unique learning environment is one that is desired and should be spawned in other societies across the East Africa Region for a greater good.