Food Security for Every Family Innovation

Introduction
The Food Security for Every Family is one of the Southern Africa Resilience Innovation Lab (SA RILab) innovation projects implemented in Chikwawa District of Malawi by Africa Windmill. The project falls under the Resilience Innovation Challenge for Food Security and Improved Income Generation (RIC4FIG) pathway 1 (Improve life and entrepreneurial skills).
The problem addressed
Most farmers rely on a single growing season, which makes them vulnerable to climate variability and subsequently to crop failure and low yields, to supply all food and income for their households. When the rains are erratic or drought occurs many villagers, families and farmers are forced to look for provision from nearby towns or cities. In most cases, this looks like the head of the household relocating sometimes hours from home to look for work. In doing so they leave their property, home and often times families vulnerable in the village. 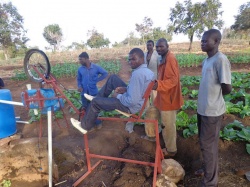 to grow food and earn income throughout the year. The target population is small-scale irrigation farmers and fabricators in Chikwawa district. The project will train the lead farmers to increase production and reduce input costs so that the longer growing season can be maximized. The lead farmers will then facilitate the transfer of knowledge and skills in their community.
.

Results/outcomes
The project will improve food security in the target populations by increasing farm production in two ways that improve resilience. First, irrigation enables farmers to grow crops throughout the year. This mitigates the impact of environmental shocks, such as drought and floods, and empowers farmers to work toward food security during the dry season, rather than waiting until the following rainy season. Second, the water pumps introduced during the project will increase the individual efficiency of each farmer, increasing production of irrigable land.