The Improved Push and Pull Innovation project’s 2nd phase kicked off early this year in Uganda’s Iganga District, Buyanga sub-County. This implementation phase is guided by three objectives including the following;

‘Improved push and pull being an agricultural approach, most of its activities are concentrated within a season’ shared Kenneth Wanyama, Lead Innovator.

Below is a detailed progress on the activities so far accomplished during the 1st phase of the running grant.

Two training sessions were conducted in Buyanga sub-County. In attendance were the sub County Chief and Town Clerk as well as the Local Council 3 Chairman. Over 40 farmers were also trained from who the model farmers were selected. This training emphasized the principles of push and pull, how it works, its establishment and management. Farmers appreciated the system having earlier seen and physically engaged with it in our model farms. ‘Thank you, people, from Makerere University for looking out for us and providing this teaching to us all. This will help us to realize better yields but also develop as individuals and families too’ shared one Farmer beneficiary.

Twelve model farmers were identified representing the 7 parishes of Buyanga sub- County. The 12 model farmers were selected on the basis of severity of weeds and pests in their gardens, there commitment to the project, attendance and active participation in the training seminars, and engagement in cereal farming among other factors.

This team of innovators have so far met with the leadership of Mayuge District which is a new district but happens to suffer the problem of striga weed and pests. They engaged the Community Development Officer, District Agricultural Officer who welcomed the idea of push and pull to control pests and weeds because other methods in the district have proved futile especially in the control of striga weed. The innovators also had the opportunity to visit cereal farmers within the district to ascertain the extent of the problem. They found out that the problem was big and widespread, they promised the community that they would work together to breed desmodium seeds in the coming months and also reach out to them in subsequent seasons.

Sensitization of the general public and other critical stakeholders is also still ongoing.

100kgs of Desmodium seeds were procured in February 2017 both for setting up desmodium seedling plant gardens as well distribution to the model farmers. Sesbania planting material (seedlings) were also procured and raised by the innovators where the leaves from it will be extracted, dried and milled. Later an extract solution from sesbania and desmodium leaves will be used to spray the maize to manage the issue of pests and nutrient enrichment.

One-acre piece of land was hired in Buyanga sub County on February 18th 2017. Buyanga sub County was considered for this exercise because that is where the model farmers are and therefore it was easier to manage this seedling plant garden as well as monitor the activities of the farmers. Similarly, this seedling plant garden is located near the water source for easier irrigation of the plants once rainfall ceases to be consistent.

The land was sub divided into 9 sub plots for easier management of key practices like weeding, gapping, thinning, water drainage among others.

Clearing of land was also done immediately after hiring it.  Land was then ploughed and finely prepared by 24th February 2017.

Model farmers were assisted by the innovators to set up their gardens with prescribed measurements while observing correct row and plant to plant spacing too. In addition to this, the farmers were given desmodium seeds which were planted at the same time with the maize seeds.

The desmodium seedling plant has already been established in an acre piece of land in Buyanga sub County.

The dissemination of the second phase of Improved Push and Pull innovation project which manages two major nuisances in maize farming i.e. striga weed and borer pests without the use of chemicals took place in June 2017 in Iganga district, Buyanga sub-County. This dissemination exercise like all the others was led by the RAN team and innovators. Three innovation teams were in attendance including; Improved Push and Pull project team, ‘Kungula’ Maize Thresher team and solar Drier Team. These innovators had the opportunity to exhibit their innovation products to the over 250 farmers and community members.  The main activities of the day included;

This exercise took place in the Buyanga sub-county hall. The farmers and other stakeholders in attendance were first introduced to the RAN team and the three-different innovator teams. The opening remarks were made by the RAN team followed by the sub-county chief who encouraged the farmers to adopt the Improved Push and Pull approach in their gardens because the method had proved effective in the area helping many to manage their perennial problems of pests and weeds.

Training of the farmers on the technical and working aspect of this solution was intensively conducted led by the innovators. The farmers were very excited and had the opportunity to ask questions which were elaborately answered.

Three of the twelve model farmers who were in attendance shared their testimonies of how the Improved Push and Pull approach had worked in their respective gardens. According to the model farmers, six weeks after establishment of their gardens, there was great and clearly observable difference in the gardens with push pull as compared to those without. Improved push and pull maize plots had significant reduction in striga and stem borer infestation and the maize plants were tall and leafy. “I am surprised at how this method works, it looks simple but what it does is unbelievable” Msobya one of the model farmers posed. “Kayongo (striga) was killing us, my maize never used to grow taller and free of pests like what I am seeing now” posed Hajat Aisha another model farmer.

All participants were later guided to two of the nearby model farmer’s garden, where they had an opportunity to practically see how the approach is set, how it works and how effective it had worked compared to the conventional methods. ’Indeed, they were impressed by the approach and promised to take it up in subsequent seasons’ noted one innovator

There was impressive and quite an interactive session of showcasing of other innovative solutions currently being supported by RAN. The Maize Thresher team and Solar Drier team too had the opportunity to exhibit their innovation to the community members collecting feedback to inform further development of these innovations. It is also important to note that the community was excited about having access to these solutions too and were positive about uptake for better yields and income generation too.

Desmodium which is a critical component in this approach especially in suppression of the weed and pest repeller happens to be scarce in the market and where it is available, it is quite expensive. To bridge this gap, one acre of desmodium seedling plant was set up in Buyanga sub-County to breed enough seeds of desmodium to make them readily available to farmers and at affordable cost. This means a minimum of 300 farmers are being targeted to benefit from these seedlings. The team that visited the breeding farm appreciated the great work especially how vigorously the desmodium was growing and spreading out.

The desmodium seedling plant yielded 152 kilograms of desmodium seeds. The yield was slightly lower than what was anticipated because of the harsh weather conditions which were characterized with minimal and unreliable rainfall. Nevertheless, the 152 kilograms yield is enough to bring 300 more farmers on board in the subsequent season since each farmer can use a half kilogram of desmodium in one acre of land. 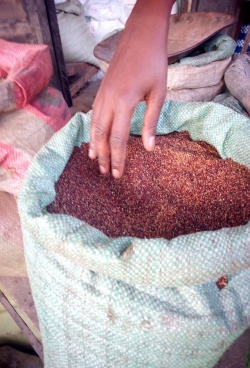 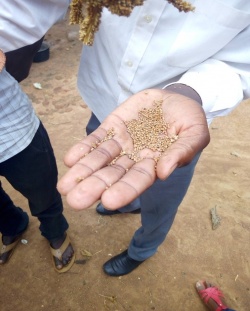