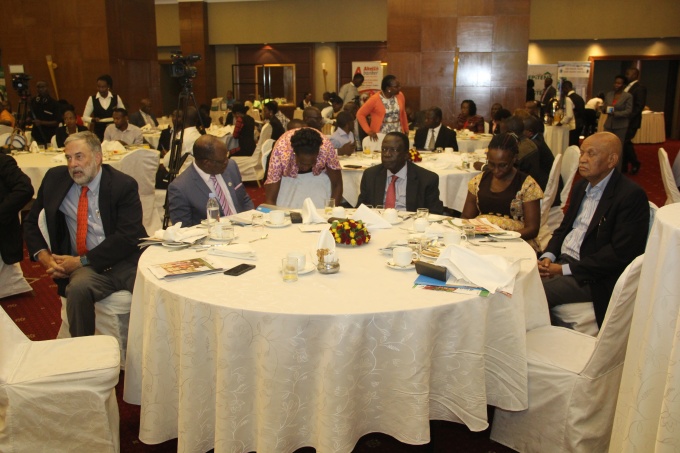 This report discusses the findings and implications for development and programming from the Multi-Country Resilience Assessments conducted by RAN’s four Resilience Innovation Labs, guided by RAN’s Resilience Framework. This report further discusses the development of resilience pathways based on further quantitative data analysis, as well as, the development of innovations informed by this analysis to strengthen community resilience. This report first discusses RAN’s methodological approach, which is organized around the RAN conceptual evidence based resilience framework; this is followed by a discussion of the findings from the four RILabs, which present the resilience key pathways as well as innovations. This work has been made possible with the generous support from USAID Washington. It is this report which we are officially launched on March 22nd, 2018!

At the launch, Prof. William Bazeyo, RAN’s Chief of Party and Acting Deputy Vice Chancellor at Makerere University shared about RAN noting that to-date, RAN has rallied 20 Universities in 13 African countries harnessing, further developing/incubating and working with other stakeholders to scale innovative solutions. He also shared that the report which was being launched was RAN’s second State of African Resilience Report-another which is directed towards further narrowing the research gap especially in the aspects of resilience strengthening. Prof. Bazeyo thanked all RAN Partners stressing that without robust and strong partnerships, RAN would not have been in position to achieve thus far. RAN has partnered with many institutions including; government bodies and the Private Sector some of which participated in the event. 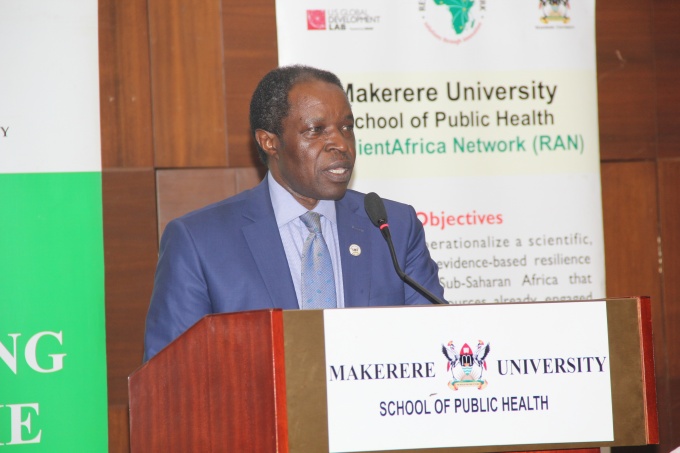 Prof Barnabas Nawangwe, Vice Chancellor Makerere University in his opening remarks welcomed all participants and thanked them to honoring the invitation. In a special way he welcomed Hon. Dr. Ajedra, the Chief Guest, thanked Prof. Bazeyo for his creativity, innovativeness and hard work especially in effectively leading RAN amidst other responsibilities and also applauded the RAN donors highlighting USAID for the continued support.‘It is such programs like RAN with support from USAID, UNDP, Humanitarian Leadership Academy among others which have enormously contributed to Makerere University’s great achievements including maintaining position as the 4th best University in the whole of Africa’ Prof. Nawangwe noted. He also thanked the RAN team for exhibiting great potential and ability to continuously contribute to research and innovation directed towards strengthening the resilience of targeted communities in sub-Saharan Africa. He was also proud that the RAN team had scientifically documented what all work done in various reports and other peer reviewed journals to further inform knowledge generation and sharing. 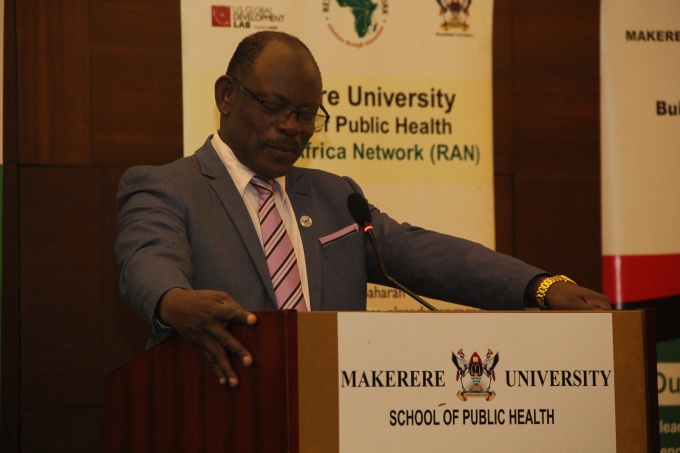 Dr. Charles Wana Etyem, Makerere University’s Chairman Council also joined the other speakers to welcome all participants to the breakfast meeting. He requested the donor bodies to keep the support flowing so that we can all together realize positive transformation in the communities. ‘Such projects like RAN require additional and continuous support from all corners so that the impact is registered in our communities. These innovations are needed now than before because community challenges are becoming more complex in nature’ said Dr. Etyem. 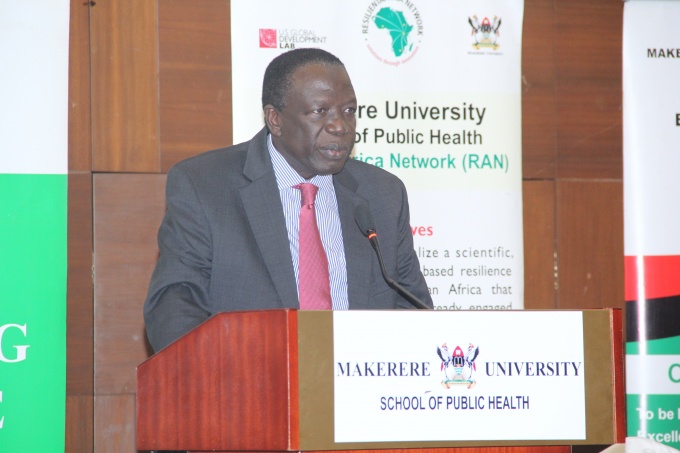 Ms. Lily Amber Kenny, Vulnerable Population Unit Team Lead USAID|UGANDA Office of Economic Growth Embassy of the United States of America with three other colleagues represented the Mission at this event. In her remarks, she also applauded Resilientfrica Network (RAN) for all the efforts noting that RAN’s huge contribution to research can not go un recognized. ‘There are several linkages between some of the work we undertake at the Mission with that one being done by Makerere University specifically the RAN project. We are therefore privileged to closely work with RAN leveraging knowledge, expertise and skills across the initiatives’ Lily noted. She added that the Mission recently engaged the RAN team to carry out a micro analysis of Underlying Drivers of Livelihoods Resilience in selected districts of Karamoja, Acholi and South-Western Regions of Uganda, and some of the findings presented by RAN are already constructively adding to the Mission’s work. That the Mission is open to continuously working with Makerere University and specifically RAN for the achievement of set goals and objectives. She also noted that the team representing the Mission, was eager to further learn from the content in RAN’s State of African Resilience Report. 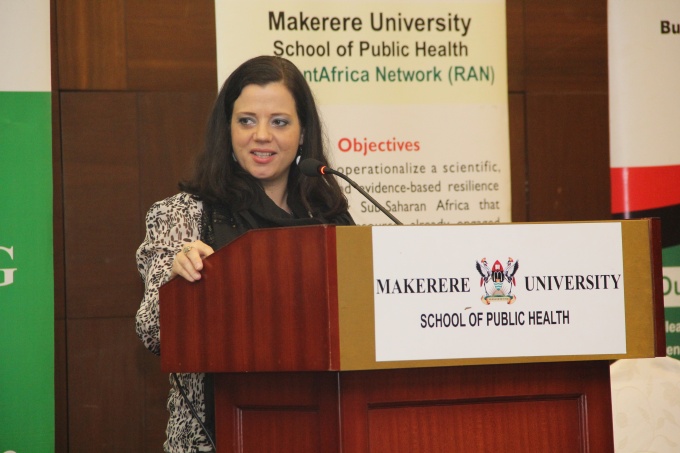 Hon. Dr. Gabriel Ajedra, State Minister for Finance In-Charge of General Duties graced this event as Chief Guest representing Rt. Hon. Dr. Ruhakana Rugunda, Prime Minister of the Republic of Uganda. Reading the Prime Minister’s remarks, he noted that Makerere University is doing a good job working together with students, faculty and the community at large to translate knowledge into innovative solutions to address various developmental challenges. He also emphasized the need for all of us to work towards breaking operational or working silos in order to meaningfully contribute to better lives in the communities in which we live and work. ‘We all need to increase our focus on education, research and development. Everything else can wait except education and efforts to boost Agriculture as Uganda’s back born’ Hon Ajedra said. He also re-echoed Government’s commitment to supporting innovation, science and technology also under the leadership of Makerere University as an institution of learning. 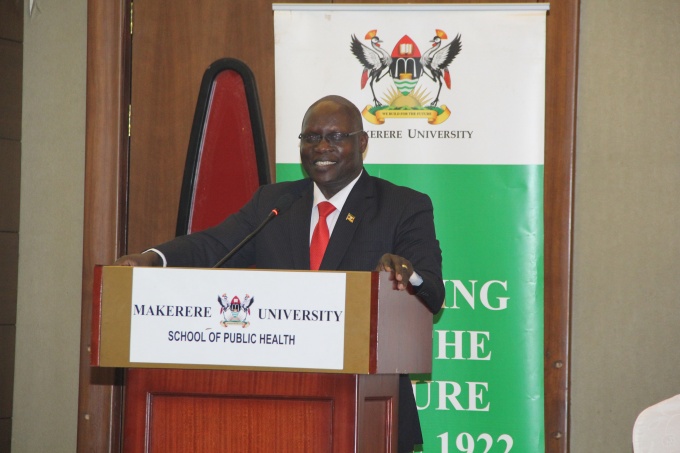 It was additionally enriching to have some of the RAN Innovators join at the launch of the second State of African Resilience Report to physically exhibit but also share about their innovations/projects. At the event, we had Wekebere-your pregnancy companion, Pedal Tap-Hands Free Water Dispensing System, Water Purification System, Akello Banker, EpiTent-a tent that breathes, Gudie Leisure Farm-for organic pesticides, ‘Kungula’ Winnowing Maize Thresher and the Solar Dryer.

Some of the innovators at the Launch 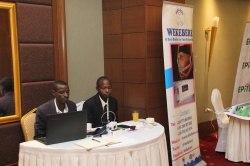 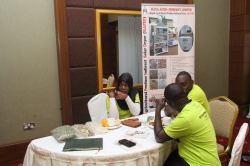 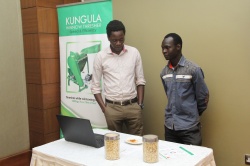 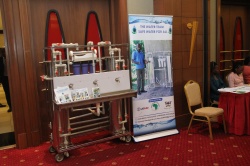 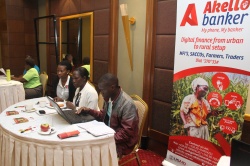 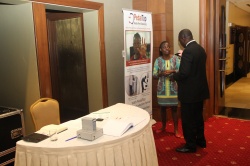 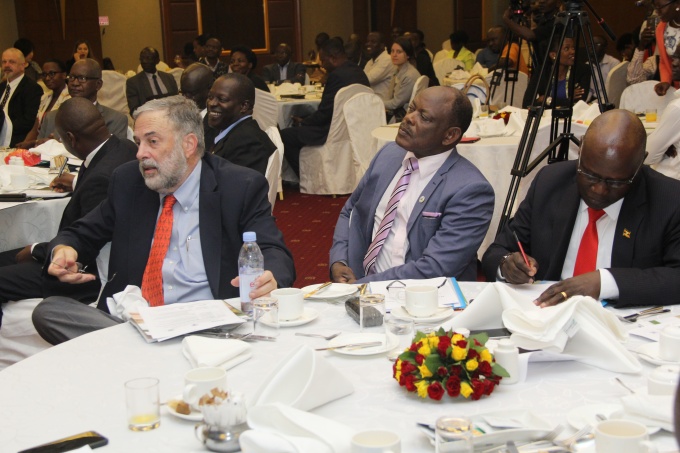 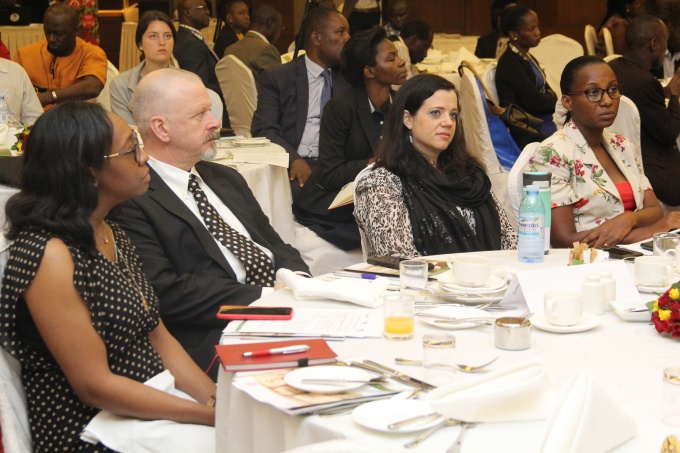