The theme for this year’s Hackathon was focused on Sustainable Development Goal (SDG)-13; “Taking urgent action to combat Climate Change and its impacts through Innovation & utilization of open data”.

The event brought together a total 108 multidisciplinary participants including Developers, Innovators, Entrepreneurs, Designers, Social Scientists, Mentors, students to co-create solutions to climate change and its impacts through cross-disciplinary collaboration and mentorship. 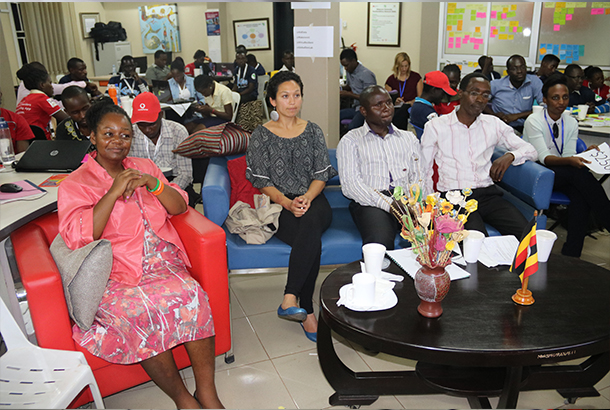 This Hackathon was special in a way that participants benefited from an interlude of the visit of the Ugandan Minister of Science, Technology and Innovation; Hon Dr. Elioda Tumwesigye before he joined in the National Technovation Awards Ceremony as Chief Guest. The minister had a 30 minutes interaction with the hackathon teams, 3 teams shared 5 minute pitches of what they had conceptualized with the Minister. The minister was introduced by Professor William Bazeyo, Dean Makerere University School of Public Health and RAN Chief of Party and after a brief tour of what the hackers were working on in their respective teams, he invited him to give remarks. In his speech, the Minister mentioned that the Hackathon was the 1st event he had attended since he assumed office on Friday July 15, 2016. He thanked all the sponsors of the event including; NITA-U, AidData, NUCAFE, Kwiksy, and Vodafone. The minister said that his role was to support young scientists, to help them develop their ideas into prototypes and look for partners to advance their innovations. He mentioned that he was happy to witness young people convene to generate solutions and that the RAN lab is the right place to find innovators and collaborate with in his new office. 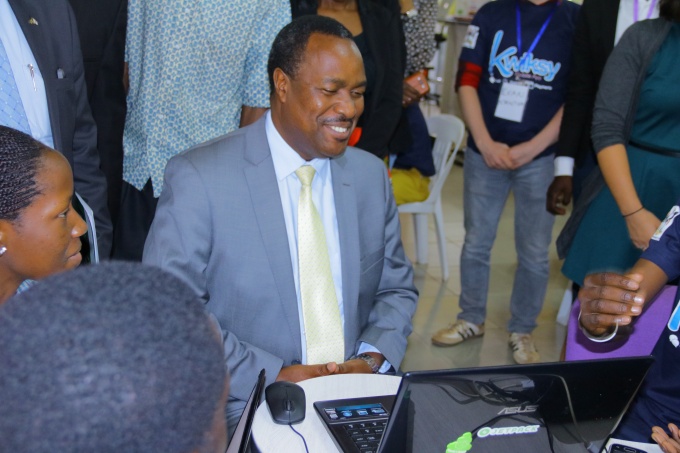 The Hackathon started promptly with the official briefing about RAN and the AidData collaboration under HESN by RAN Engagement Manager, Ms. Deborah Naatujuna who welcomed participants and thanked them for coming in to take part in the development of solutions to address climate change effects. She shared about RAN’s commitment to building a vibrant innovation ecosystem through offering internship training opportunities to students, Mentorship, support through the Innovation Garages, capacity building sessions like the GIS training facilitated by the AidData Summer Fellows among other offerings at RAN. She then presented the hackathon dos and don’ts and a few procedures to be followed which included; Teamwork diversity, encouraging hackers to remain open minded in order embrace wild and crazy ideas, reach out for help from the Mentors in the room, and to stay focused on the topic when hacking among others. 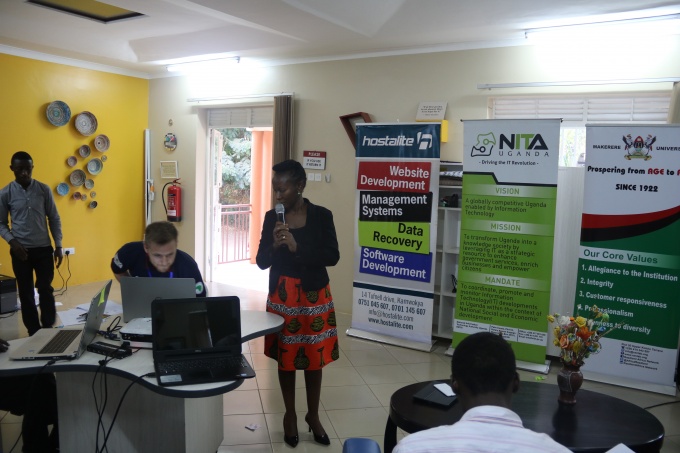 The RAN Engagement Manager, Ms. Deborah Naatujuna giving a brief introduction about RAN and the AidData collaboration under HESN

Participants were excited to host AidData Summer Fellows who had been working in Uganda for the last 2 months. They served as Mentors of the day, to help hackers refine their ideas, interact and manipulate the provided data sets, Laura Richards on behalf of the Summer Fellows gave a presentation about the GIS training they had conducted a few weeks earlier and how it related to this Hackathon, the Hackathon theme and the kind of deliverables they expected from participants. In her presentation, she explained that SDGs are intergovernmental aspirational goals with a set time line from 2015-2030. The SDGs are 17 in number but the Hackathon theme was addressing SDG 13 that focused on climate change. “For this particular Hackathon some of the specific issues we are looking to address include strengthening communities’ capacities to withstand natural disasters, integration of climate change into policy and early warning systems and among others’’emphasized Laura.

Ms. Christine Muhumuza, the Research Officer at RAN then gave an evidence based presentation on climate change effects in Africa and beyond by painting a picture of the current problem of climate change its consequences, causes, vivid manifestations and possible solutions. She asked participants to brainstorm on each terminology used and noted that, Uganda’s vulnerability to climate change is as a result of factors like; heavy dependence on the rain-fed agriculture, rampant diseases, limited resources, poor socio-economic infrastructure. “Climate change affects every sector of development and so it is a cross-cutting issue’’, she remarked. In conclusion, she noted that there is need to identify priority activities to guide response to climate change, mitigation and adaptation. 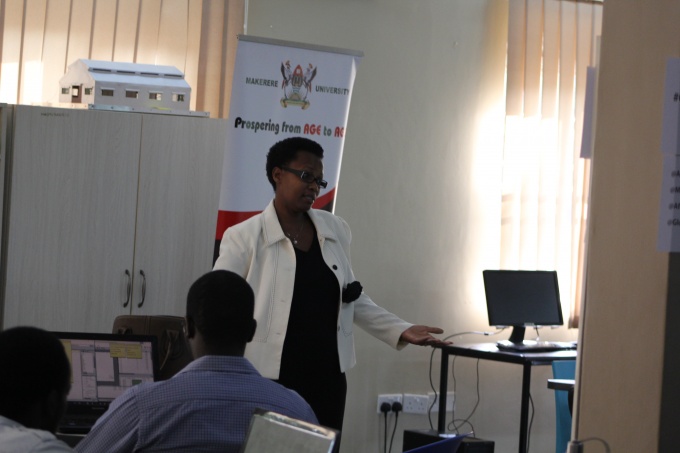 Ms. Christine Muhumuza, the Research Officer at RAN giving evidence based presentation on climate change effects in Africa and beyond

The hackers were then given a 10 minutes interval to form teams in what was termed as a “Speed-dating session”. During this session, participants ensured multidisciplinary engagement as they formed teams and joined in self-introductions. At the end of this exercise, 12 teams were formed and these included: SEEREP, FLS, AFORAPP, HACKSHADES, SAFENATURE, and THE RIGHT MINDSET to mention but a few.

The teams were expected to develop their ideas and work on 3 minute project pitches which would then be presented to the jury and fellow participants. The event climaxed at exactly 6:00pm when Judges convened to listen to pitches.

The Pitching and Awards Ceremony

Dr. Fredrick Kitoogo on behalf of NITA-U gave opening remarks during the Pitching and Awards Ceremony. He re-affirmed that their role was to support innovators, and that their desire was to move innovations from concept to practical solutions that will have positive impact in communities. He said that they were very committed and their desire could only be achieved through partnerships like the one with RAN Lab. He promised that NITA-U would avail access to internet links to Labs like RAN and avail open government datasets, for innovators to mine and develop appropriate solutions to further inform policy. He finally thanked all the innovators for their efforts and interest in innovation, he also thanked mentors for the incredible job they had done in helping the teams to come up with final projects for the day.

Dr. Eng. Dorothy Okello who is the Director Innovations at RAN, in her remarks emphasized the power of compelling pitches. “Pitches ought to be precise and straight to the point, putting into consideration the problem/need, impact, and business model’’ said Dr. Okello.  She also advised the presenters to avoid crowding their slides with content which is not meaningful. Dr. Dorothy encouraged the teams to always be time conscious, she encouraged the teams to learn to pitch their ideas so well that they can interest someone great like Bill Gates to gain interest in their innovations. She also noted that it was preferable to have each team member participate either in the presentation itself or at least responding to the questions there after. She also urged the members to know each team member’s abilities, and ride on these, make their presentations less wordy and make use of more images to effectively communicate. 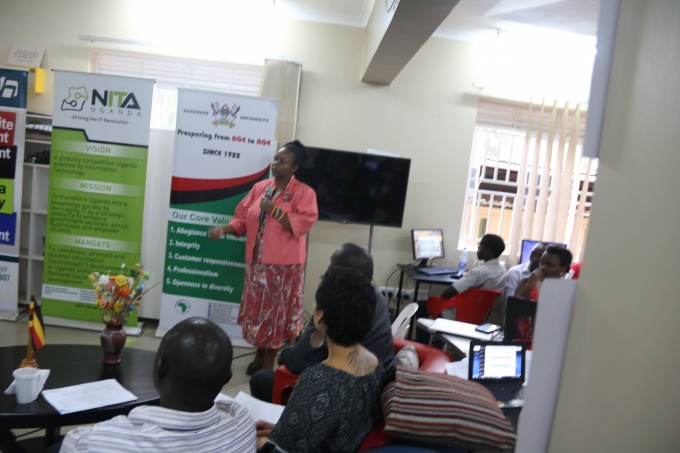 One of the judges was given an opportunity to share about their interests. Mr. Allan Mazimwe from Makerere University remarked that the judging criteria was based on three critical things: using open data, specifying who your partners were and having an idea that was going to reach and change people. Allan said that all the ideas were great and feasible; they just needed a little fine tuning. 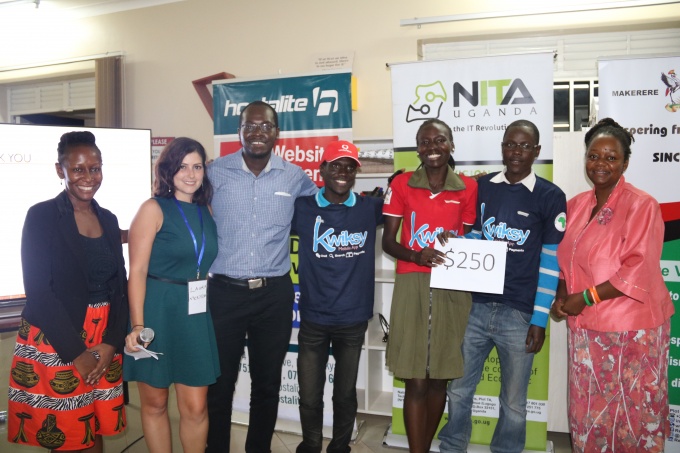 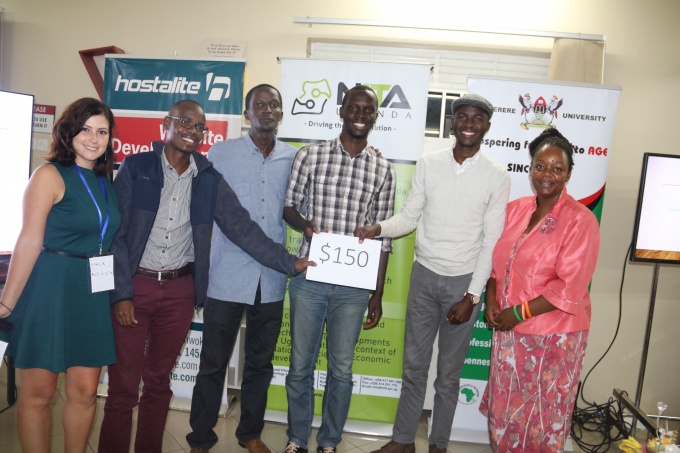 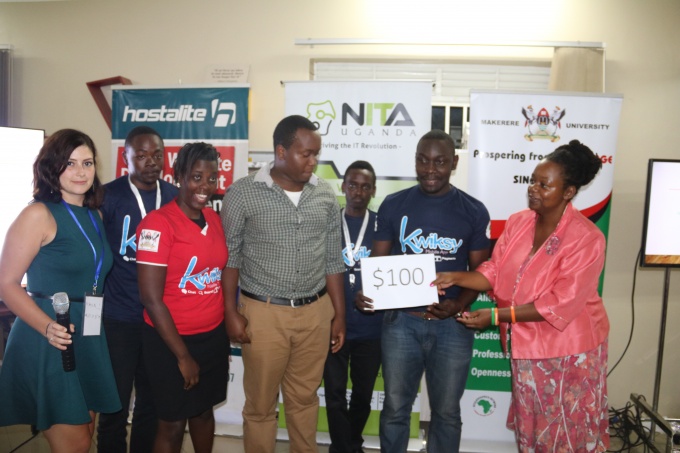 This event was made possible with the support from (Not in any order of preference or support provided);

It was a true delight to have these many partners and participants gather to work on solutions to combat climate change and its effect. This is also one of the great milestones of HESN Inter University collaboration between Makerere University School of Public Health – RAN and AidData with Summer Fellows “This GIS Hackathon was a great learning and networking opportunity” noted Taylor one of the Aid Data Summer Fellows.

Do not miss the 4th Edition of the GIS Hackathon which will be held next year once again tackling issues that affect us at a global level. 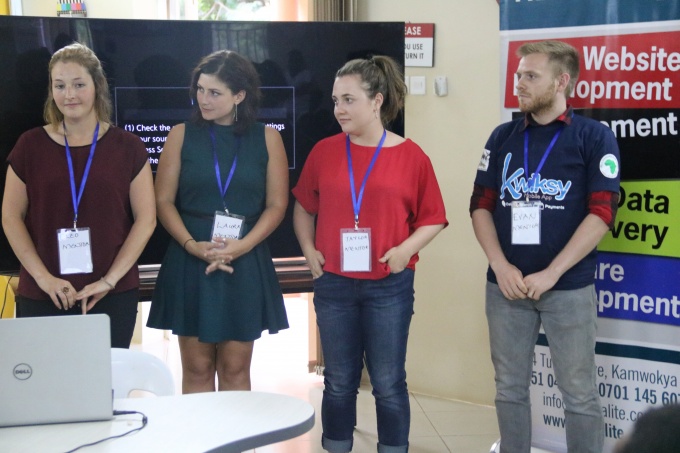 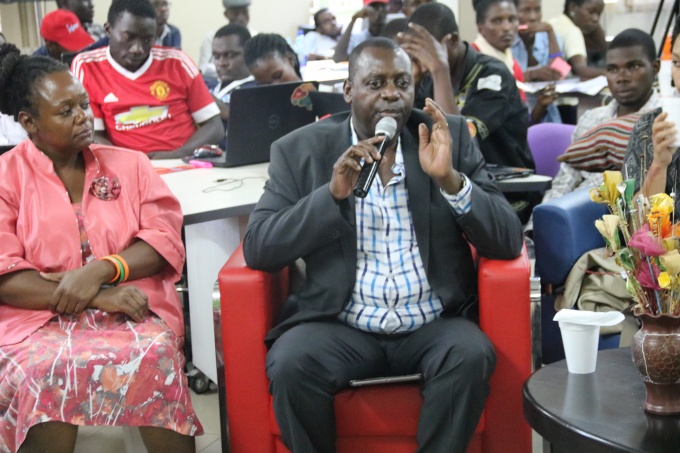 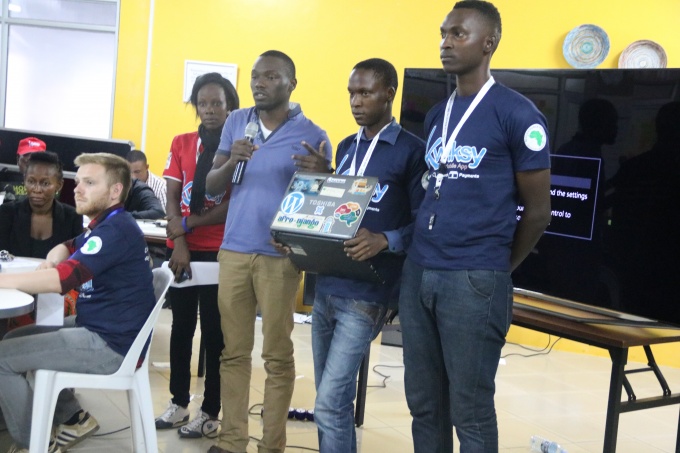 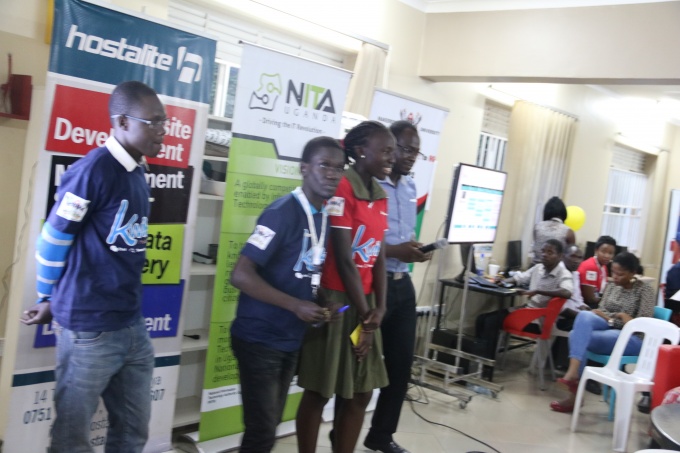 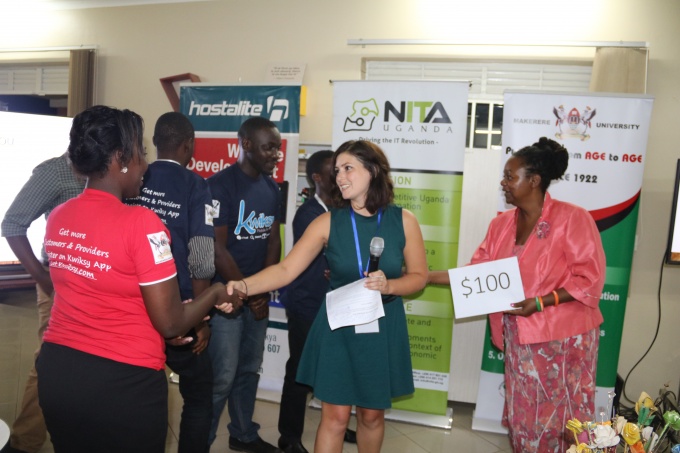 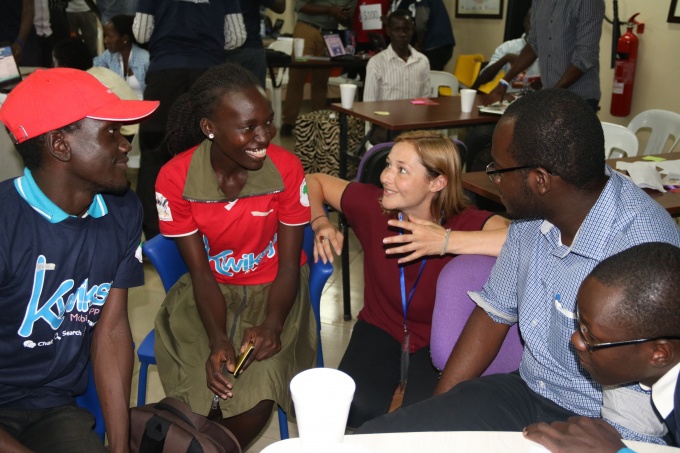 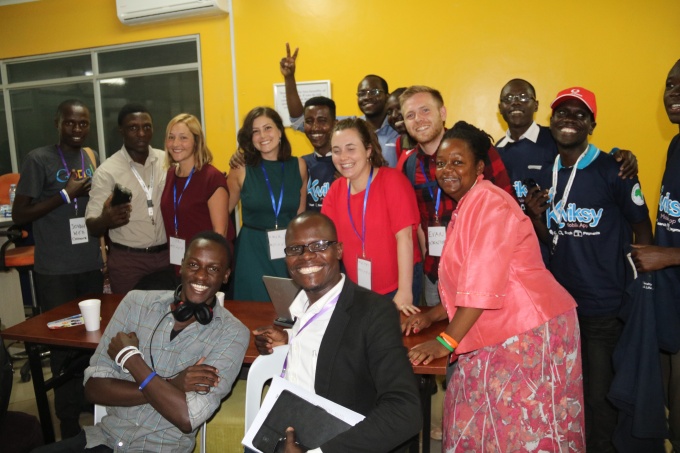 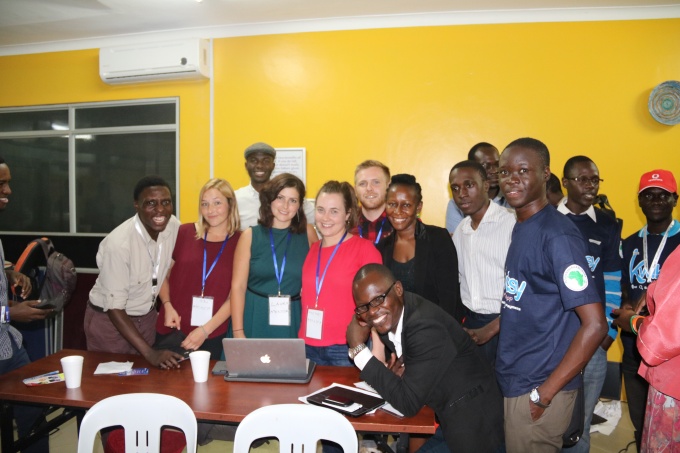 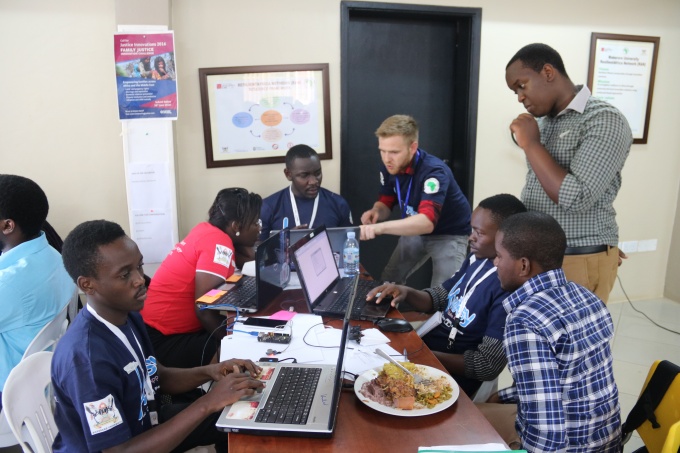 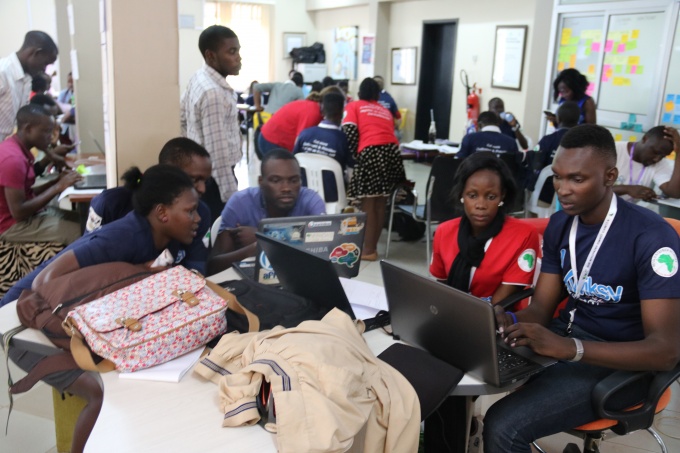