Standing together in the fight Against Cancer

On October 22, 2016, Makerere University School of Public Health ResilientAfrica Network (RAN) team members individually joined other stakeholders including; AAR Insurance, Uganda Peoples Defence Forces (UPDF), Nakummatt supermarket, All Saints Cathedral, Radio City, MEGA Pix, Café Pap, NTV Uganda, RIHAM, Rwenzori and Wava water in the Royal High Tea event to raise funds directed towards further supporting the children’s’ cancer ward in Mulago National Hospital, Kampala Uganda. The highly attended colourful event which brought together approximately 500 multidisciplinary and cross sectoral participants was held at the Kololo Airstrip. It was organized by Nkesiga Cancer Foundation https://www.facebook.com/nkesigacancerfoundation/  and honoured by Allen Kagina, Executive Director Uganda National Roads Authority (UNRA) as Chief Guest. “Cancer has become a high killer disease not only in Uganda but the whole world, it takes all our efforts to fight it to zero death rates, let us all work towards keeping these efforts growing stronger as together we can…” Ms. Kagina noted as she addressed the tea participants.

During this event, participants engaged in auctioning of some items to raise additional funds, and a competition for the best decorated tea table as candles were lit in memory of all souls departed as a result of cancer and testimonies shared before the royal high tea was served to all.  Each participant contributed to either an Ordinary (10 seater at 1,000,000 Ugx only) or Corporate table (10 seater at 2,000,000 Ugx Only) directed towards further supporting operations in the children’s cancer ward in Mulago National Referral Hospital. Joining in these efforts was an individual initiative by the RAN team. 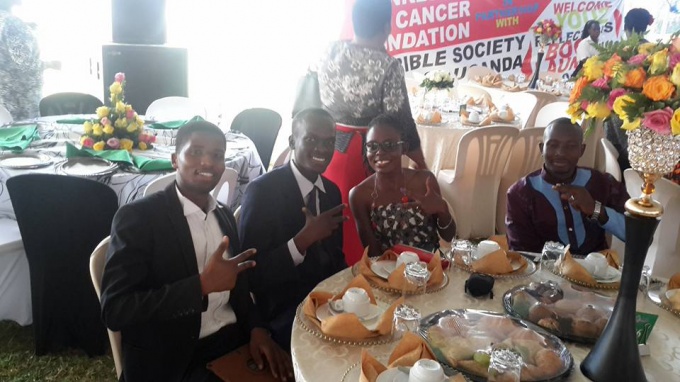