All through during the internship opportunity at RAN, the students are taken through hands-on trainings to further equip them for the life after school. Some of the trainings offered to the students include; the MKITS and Design Thinking (DT) training, July 4-5 and 10-11, 2017 respectively. MKITS stands for Modular Knowledge and Information Transaction System http://www.ranlab.org/resources/m-kits.  MKITS are short informative videos which are captured, edited and widely shared to further enhance learning. Currently. RAN MKITS are shared on the RAN YouTube page and also on Facebook for ease of access.   I learnt that to develop MKITS, one needs to capture videos, record audios and also take ‘talking’ pictures or pictures which are communicative’ James Fredrick Mukyinga, one student intern shared.

Joseph Mukaawa Lubega, the Multimedia Developer at RAN had the opportunity to lead all student interns through the MKITS development process. He highlighted several video production stages as described below;

All the planning takes place during this stage. Here, think about all the things you are going to need or use to capture the required footage and clearly define the tools you are going to use before any video is shot. Visualization is also done in this stage. The person going to shoot the video also needs a story board, the sketch of what you need in the video including what the first picture should look like and the second till the end of the video. A story board is a diagrammatic presentation of what will be entailed in the video. Although story boarding is usually not done, by many people, it is an important aspect of the videography process.

I learnt that this is when the real video recording is done and recorders are physically taken and used in the field.  The person shooting the video strictly follows through the story board made in the previous stage so that the video is organized as planned.

Establishment shots – these shots enable an individual to know the place where the video was shot without necessarily anyone earlier talking about it. They include use of pictures without the audio.

Wide shots-are ones that take a full person or full place/space. These show the details in a particular picture or area.

Medium shots – these are from the waist upwards.

Close ups – these are shots taken from the shoulders upwards.

Extreme close ups – these are ones trying to help the viewer see what is being written on paper or the real big close focus.

Student interns also learnt about and had an opportunity to exercise and experience camera movements as put below;

The real task delved in at around about this time when we had to  go to the field and actually start on video shooting. Throughout this Video shooting exercise, we worked in teams of 5. For me and my team, the problem we had identified was heavy traffic in Kampala City and the video we shot was along Jinja Road near Airtel offices where there is usually heavy traffic most especially during the morning and evening hours.  I was honored to manage the camera as other group members were acting out the different parts to be included in the video, James shared. It was time to recall all the teachings received in class including the fact that we should not shoot videos against the sun or light. 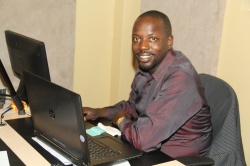 ‘On July 5th, 2017, early in the day we returned to RAN and started editing the videos we had shot. Joseph took us through the use of Adobe Premiere CC 2015 a software for editing videos that was new to all of us. I was excited to export my first video and I have edited more two videos since then. It was a good experience for all the teams’, shared a smiling James 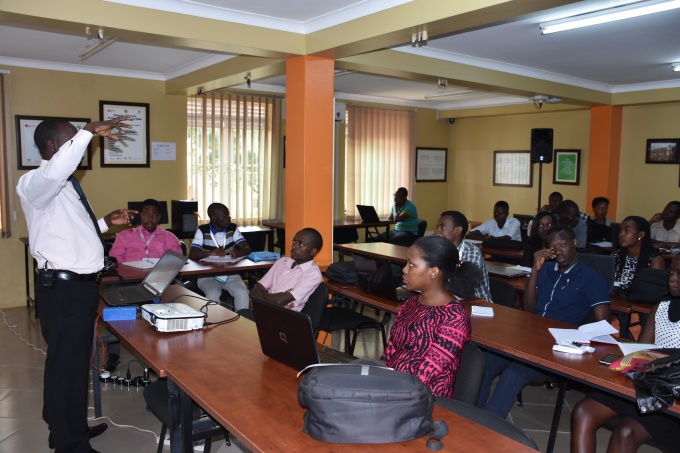 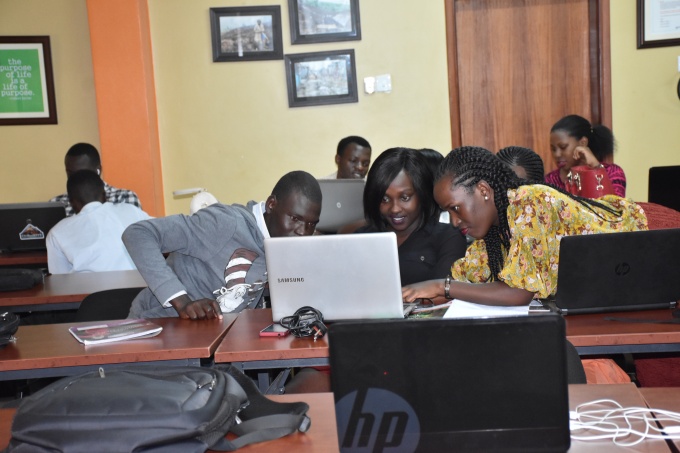 This training gave an opportunity to all the RAN Student Interns 2017 cohort to appreciate that the Human Centered Design approach is more than the look or feel of something but it is rather that whole experience which each living human being needs to benefit from. Designing innovative solutions should be human centered because it is our role to work towards finding solutions to the problems affecting the communities in which we live and serve, it should also be collaborative so that multidisciplinary and cross-sectional teams work together for good output leveraging each member’s value add, experimental in that it looks at other likely failures that may happen, and optimistic for example find solutions of the problems already thought through.

During this engagement, student interns also looked at the importance of empathizing with the population in question which entails putting yourself in the shoes of the others or even users in case you are working on a product. It is important to put the users’ needs into dire consideration when developing a solution to address different community challenges. It was also during this session when the interns learnt about problem framing involving the actual process of identifying the existing problems affecting the societies, brainstorming which involves thinking about the problems without specifically going to the field coupled with coming up with as many possible solutions as possible to the identified problems, build and finally test the proposed innovative solution that the individual or team has come up with verifying if it is sustainable and can be easily adopted by communities.

The interns were encouraged to work in groups. ‘My group emerged the best in brainstorming with a total of 107 problems affecting Makerere University identified. Some of these problems were unemployment for the fresh graduates, inadequate skills to enable students start their own businesses or attain self-employment, insufficient funding, and many others’ said James. He added that, ‘the group I closely worked with decided to focus on the problem of inadequate skills faced by most of the Makerere University students and we also brain stormed as many possible solutions as possible some of which were training and mentorship, tweaking the education curriculum, encouraging students to be creative and innovative, the university partnering with other institutions in search for employment opportunities which can benefit   the students to mention but a few’

The above solutions were plotted on a Feasibility against Impact graph to get a solution that was cost effective but at the same time of high feasibility as shown below; 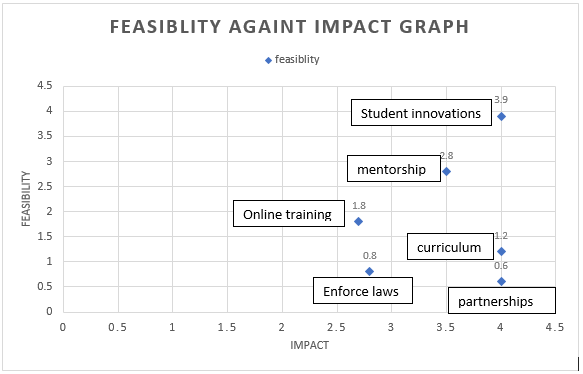 This group decided to further work towards seeking for support and encouraging students from Makerere University but also other higher institutions of learning to turn the knowledge already generated in dissertations and theses into innovations.    The team also noted that RAN was already leading in identifying these innovative solutions being worked on by students, faculty and Mukyinga the community at large and thus the need to leapfrog on this already established innovation lab for the benefit of many more students and community members.  In addition to the above, this group is also coming up with a website on which they shall post student innovations and creative projects, they have agreed to use social platforms even more to publicize their work  and share how it is relevant, they will also work on creating innovation groups as a means to encourage more students to work together leveraging the benefits of team work including being able to harness each other’s strengths, efforts and knowledge among others for better deliverables but also sharing out tasks. It was beneficial participating in these engagements with part of the RAN team.  Details about the Human Centered Design (HCD) Approach are accessible on http://www.ranlab.org/human-centered-design-hcd. 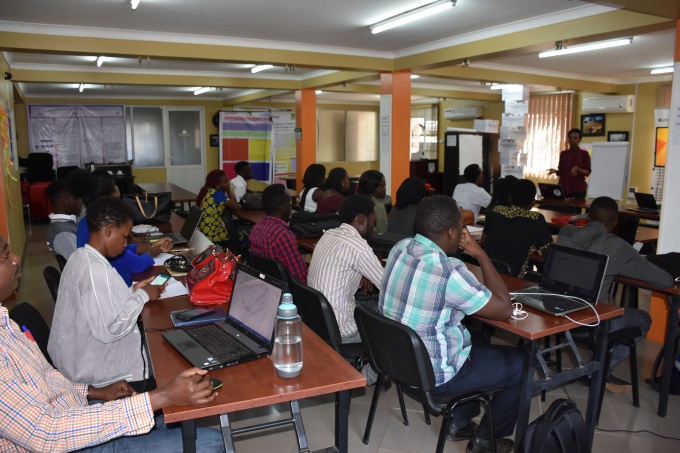 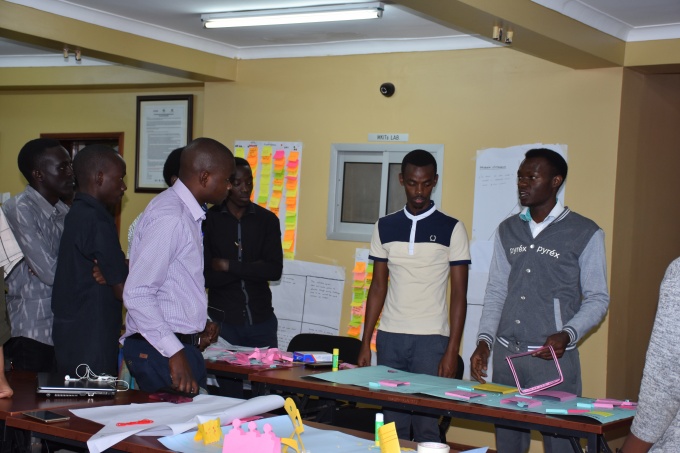 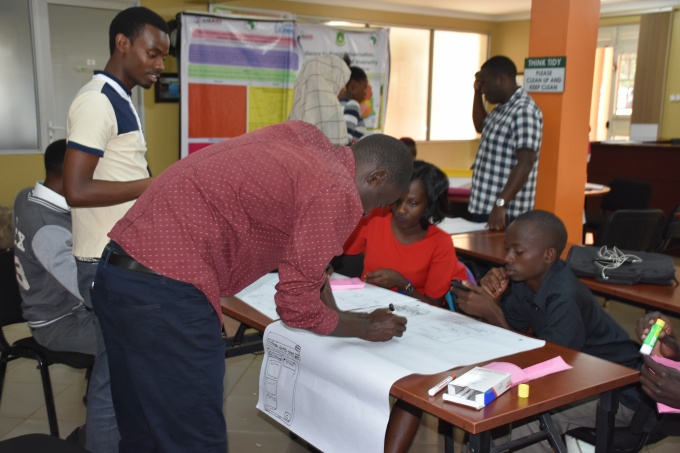 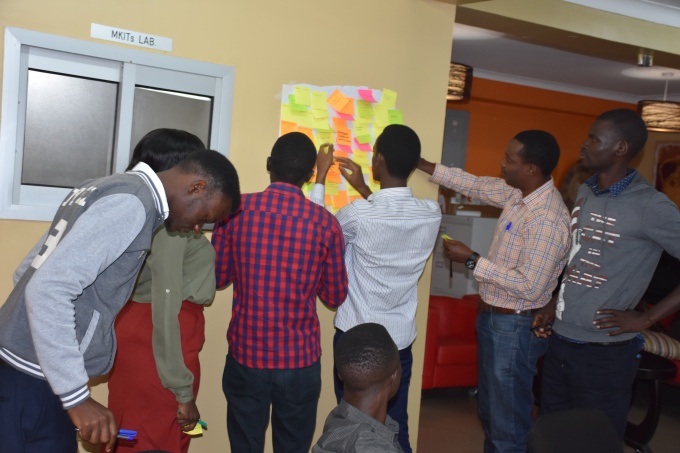 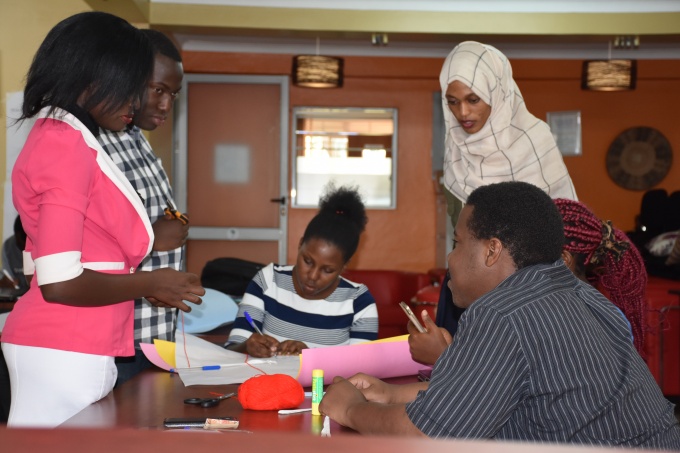