The World Veterinarian Day was created in 2000 by the World Veterinary Association to highlight and promote the lifesaving work performed by veterinarians around the globe.  Uganda has been celebrating the day for more than ten years ever since the day was inaugurated 16 years ago. This year’s celebration was held from 24th to 30th April 2016 at Makerere University and it focused on promoting continuing education for veterinarians in one health. The celebrations were guided by the theme: “Continuing Education with a One-Health Focus” with the purpose to create public awareness on the role of veterinarians and the importance of continuing veterinary education in One Health. Makerere University School of Public Health-ResilientAfrica Network (RAN) was privileged to be one of the activity-implementing partners as it supported the exhibition exercise, selected and awarded exhibitors with innovations proving to have a more Trans formative effect in the communities, but most significantly, the RAN Team actively participated in the One Day Scientific Symposium held at Makerere University College of Veterinary Medicine and Agricultural Biosecurity (CoVAB).

Veterinarians play a crucial role in protecting human health by keeping animal diseases away from humans. All areas of the veterinary profession, provide opportunities and responsibilities to improve the health and welfare of animals, and therefore, improving the health of humans.  Uganda requires a very good performance of the National Veterinary Services both in the public and private components, not only to successfully control diseases, but also to tackle food safety issues and to effectively prevent and control any biological disasters. This is possible if the veterinarians are well trained to preserve animal health and welfare, as well as to tackle public health issues. Continuing Education is therefore necessary for veterinarians to keep their knowledge updated with the latest developments, skills, and technologies required, enabling them to efficiently control health risks at animal sources. Veterinarians subscribe to a unique set of people as the profession is characterized and challenged by variety of species and health problems. This variety is manifested in the number of diseases shared between animals and humans called zoonosis or zoonotic diseases that can only be best prevented at the animal source by veterinarians. Therefore, this year, the WVD’s theme focuses on how veterinarians continue their education efforts to increase their expertise on One Health topics, such as zoonotic diseases, food safety or antimicrobial resistance, and how they collaborate with the human health sector to tackle these issues.

The zoonotic diseases are becoming a serious public health concern. Therefore, this summit calls upon multidisciplinary teams to work together to find new approaches and also create innovations that will solve/address these complex health challenges.

In Uganda today, the cases of rabies among humans are alarming and in most cases dogs are responsible for the transmission through dog bites.  It is because of this, that a resolution was passed during the commemoration to hold a countrywide rabies prevention awareness campaign and vaccination of dogs, cats and other susceptible domestic animals.

Other activities that characterized the World Veterinary Day commemoration were as follows:

During the One Day Scientific Symposium, Professor John David Kabasa, the Principal, CoVAB emphasized the necessity to integrate ideology, politics, culture, economics, religion, environments, race ethnicity, zonal National efforts and education in order to promote One Health. He also urged students never to despise small beginnings. “What is in your heads is of value but if you heap it with filth then it will not produce anything of value,” he emphasized.

Nathan Tumuhamye, Director of the ResilientAfrica Network (RAN) www.ranlab.org Eastern Africa Resilience Innovation Lab (EA RI Lab) shared about the opportunities that RAN is offering in relation to the 2016 World Veterinary Week/Day theme. These include but are not limited to theHuman-Centered Design (HCD) course training participants how to create innovative, effective, and sustainable solutions directed towards addressing communities’ most pressing challenges. He also presented some of the innovations RAN is supporting in order to help innovators to improve the quality of their projects such as the Macotuba app, a mobile based android application designed to diagnose Tuberculosis (TB) by using a mobile phone and breath sensor called the TBNose. He further encouraged students to apply for the several student grant opportunities shared by RAN on Social Media and RAN’s Website.

The World Veterinary Day weeklong commemoration was peak marked on Saturday April 30th, 2016 at the Makerere University Main Hall. Presiding over the commemoration, Prime Minister, Rt Hon. Dr. Ruhakana Rugunda, who represented the President, noted that the One Health approach is the right way to go in order to solve Uganda’s current health challenges.  In a speech in remarks read for him by Uganda’s Prime Minister Rt. Hon Ruhakana Rugunda, President Yoweri Kaguta Museveni said that the theme of the day is very timely, due to the fact that zoonotic diseases are becoming a greater threat to human health, a phenomenon that is gaining further global attention. “Human, animal and environmental health is intricately interlinked. The animal sector is susceptible to drought conditions, therefore, educate people to stop destroying water catchment areas”, he further noted.

President Museveni remarked that the World Veterinary Day is a good interface through which farmers get more awareness and exposure to the different animal production technologies.

The Minister of Education, Retired Hon. Jessica Alupo proudly noted that there are lots of innovations coming out of Makerere University, One Health being one of them. She said through the One Health approach, the challenges of insufficient cohesion are addressed. She therefore called for institutionalization of the approach across the University and beyond.

The Minister of State for Agriculture, Animal Industry and Fisheries, Hon. Bright Rwamirama noted that the day is intended to illuminate the work of veterinarians worldwide, including in areas like food safety, quarantine and animal transportation practices. He noted that scientific and technological advances have led to increased food production while at the same time, raising public health concerns.

“There is more use of antibiotics as growth promoters than in clinical practice. There is also need to study the connection between diet and animal food production”, he said. He also thanked the Ministry of Health in Uganda for spearheading the formation of the One Health Country Taskforce that has enabled government to manage several outbreaks.

The Vice Chancellor, Makerere University, Professor John Ddumba-Ssentamu congratulated Makerere School of Public Health and the College of Veterinary Medicine, Animal Resources and Bio-security (CoVAB), for championing One Health in Central and Eastern Africa which has now expanded to West Africa. He said, “Implementation of the approach presents the need to continue training for skills to remain relevant.” He further added that Makerere University is committed to supporting CoVAB in doing this.

Professor John David Kabasa, the Principal, CoVAB noted that the endorsement to host this year’s commemoration enables the College to play a greater role in the national development agenda.

The Principal Investigator, One Health Central and Eastern Africa and Dean Makerere University School of Public Health, Professor William Bazeyo shared the history of OHCEA with the guests. He said since its formation in 2010, OHCEA has supported a network of Universities in the region, which has demystified training in health as an integrated approach. “We agreed to cause change by demystifying training by training different professionals together so that when they go out they have knowledge beyond their primary fields. We are the first country to have curricula with a One Health module in Africa”, he added. As a result of these efforts, some countries in the region like Rwanda have committed resources to One Health.

The President, Uganda Veterinary Association, Dr. Dominic Mundigo Lali appealed to government to put into consideration the establishment of a National One Health Commission to strengthen the role of veterinarians in the operations of the Food and Drugs Authority as well as establishing a regulatory entity for veterinary medicine practitioners.

The event also involved a tour of the exhibition hosting over 20 Innovators displaying innovative and novel approaches in their respective fields of practice under the theme One Health. 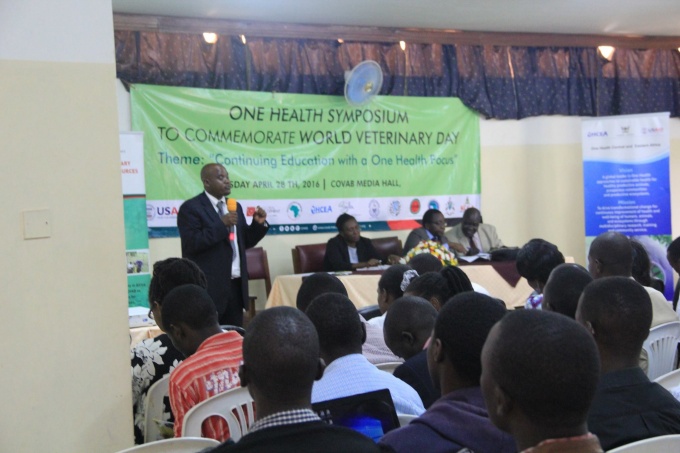 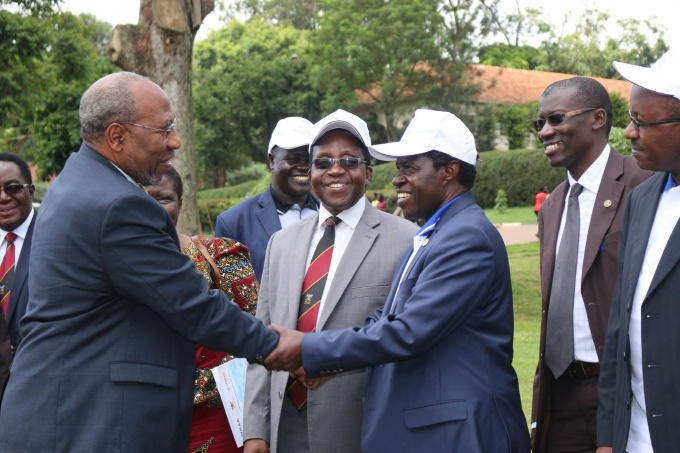